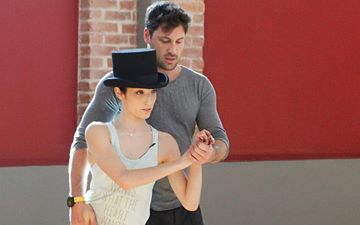 The Dancing with the Stars season 18 finale is set for Tuesday, May 20.

The actual episode will begin airing at 9 p.m. EDT on ABC.

Before that, a special program “The Road to the Finals” will start airing at 8 p.m.

On Monday, James Maslow and Peta Murgatroyd were eliminated despite coming in third in total points.

Fans came through to save last place Candace Cameron Bure, and her partner Mark Ballas.

Joining them in the grand final are Amy Purdy and Derek Hough, and Meryl Davis and Maksim Chmerkovskiy.

“The 2-Hour Finale on TUESDAY MAY 20 will be loaded with incredible performances! Following an opening number featuring all 12 couples from this season as well as the judges, one of the three remaining couples will perform an encore of their Freestyle routine decided by fans via Twitter,” according to ABC’s preview.

“The finale will also be your first chance to see Team Loca perform LIVE to ‘Livin’ La Vida Loca’–the performance from Latin Night that had to be cancelled due to Amy Purdy’s injury that night. Tuesday will also feature the first ever dance between Olympic partners Meryl Davis and Charlie White as well as the three remaining couples performing a new routine as part of the ’24 Hour Fusion Challenge.'”