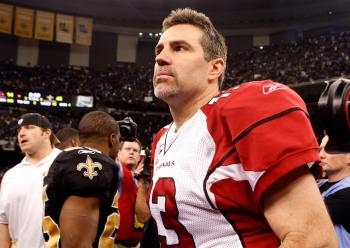 DANCING WITH THE STARS: Former NFL quarterback Kurt Warner as well as former NBA small forward Rick Fox may be on the next Dancing With the Stars season. (Ronald Martinez/Getty Images)
Entertainment

‘Dancing With the Stars’: Kurt Warner and Rick Fox Could Compete

Alex Johnston
View profile
Follow
biggersmaller
Print
"Dancing With the Stars" has not officially announced the new lineup for the next season, but reports have emerged that former Super Bowl quarterback Kurt Warner and former NBA Champion Rick Fox will be on the show, according to E Online.

"Dancing" will make their announcement on ABC’s “The Bachelor Pad" on Monday night.

Athletes are notable for winning the contest. In the past 10 seasons, five athletes have won.

Fox, who played small forward for the Los Angeles Lakers where he won three championships, has acted and performed in front of the camera before, playing a prison inmate on the HBO series “Oz” and has other credits to his name.

He took roles in movies like Blue Chips, Holes, He Got Game, and others. Recently, he had a part on the show "Dirt” in 2007.

Warner most recently retired as quarterback for the Arizona Cardinals, after posting up Hall of Fame numbers throughout his career. Warner won a Super Bowl with the “Greatest Show on Turf” St. Louis Rams in 2000 and was named the game’s Most Valuable Player.

Before his career, Warner’s entry into the NFL is the stuff of legend, having famously bagged groceries for minimum wage before getting signed as the second-string quarterback behind Trent Greene. Greene went down with an injury, prompting Warner into the starting position and the rest is history.

Warner recently made a Super Bowl run in the 2008-2009 season with the Arizona Cardinals.