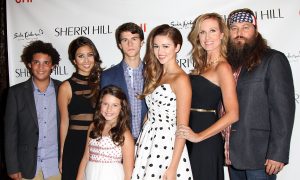 The final results show for Dancing With the Stars season 19 is on Tuesday night, starting at 9 p.m. EST.

See video highlights and a recap of Monday night here

—Third Place is Janel and Val

“I’m so lucky to be standing here next to him. You are my trophy,” said Janel.

—Second place is Sadie and Mark

“This has been an amazing experience,” said Sadie.

“He deserves it so much, he’s one of the most hard-working people I’ve ever met,” Witney added

See below for live updates and highlights from the results show. Most current at top.

“The amazing Alfonso, always turned on to the max,” Bruno said. “You always give the audience what they want. You’re a legend!”

“Alfonso, you love to dance, and we love to watch you. You’re like a glitterball,” said Carrie Ann.

–Janel and Val dance second, doing a fusion of Foxtrot and Paso Doble.

“You combined the how of the technique with the wow of the performance, and you’ve done that throughout,” said Len.

–Sadie and Mark do the first “fusion” dance, a combination of Samba and Quickstep. “Yours is a Cinderalla story … and your leaving a dancing princess,” said Len. “This dance wasn’t perfect, but for 24 hours you did a great job.”

“You have come so far from week 1,” Julianne added.

–The three finalists are set to perform dances they had only 24 hours to prepare.

–Derek and Bethany dance, and then there’s a video montage of the last couple weeks, including the Halloween special.

–The professional dancers do multiple dances, including one with all the women.

–Lea and Artem, who got in sixth, dance next.

–Mark and Sadie do a Cha Cha on the outdoor stage, followed by a Cha Cha from Michael and Emma, and Antonio and Cheryl. The finalists pay tribute to the Fresh Prince of Bel Air.