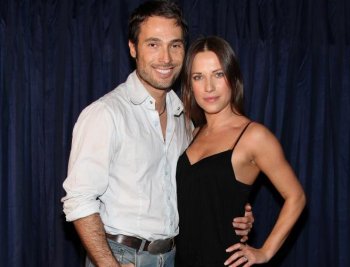 'Dancing with the Stars' dancer Edyta Sliwinska said she disagreed with the show's producers and left, according to a report on Monday. Pictured above, she and husband Alec Mazo perform at the 'Hands For Haiti' acoustic cirque show to benefit Doctors Without Borders at Le Studio Theater Space on February 6, 2010 in Santa Monica, California. (Angela Weiss/Getty Images)
Entertainment

Alex Johnston
View profile
Follow
biggersmaller
Print
Dancing With the Stars Edyta Sliwinska has left the show, according to a report on Monday.

Sliwinska, the only professional dancer on the show for all ten seasons, had a “major disagreement” with the show’s producers, TMZ reported.

The 29-year-old danced with the show since the 2005 season. "The producers' vision of what they wanted my career to be did not meet my expectations," she told TMZ.

She added by saying that “I want to work more with my husband,” who is Alex Mazo, the show's first season’s champ.

TMZ said that the show’s representatives didn’t have any comment on the issue.