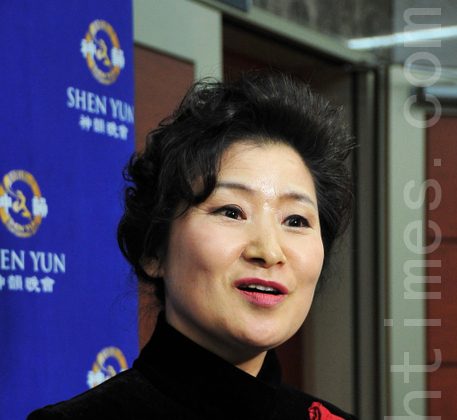 DAEGU, Korea—Shen Yun Performing Arts New York Company’s first performance of its 2012 Korean tour was held in Daegu Suseong Artipia on Feb. 24. Korean dancing artist, Kim Mi-hyang, had been yearning to see Shen Yun. Ms. Kim said she was very joyous after watching the performance of classical Chinese dance and music. She said the flawless performance amazed her and purified her heart. “I feel the dark part of my heart has brightened up,” she said.

Once she heard that Shen Yun was coming to Daegu, Ms. Kim was determined to see its first show in Korea. “I have always wanted to watch Shen Yun when the company toured Daegu before. … Now I am so glad. It was the right thing to do, to come today.”

Shen Yun’s beautiful presentation thrilled Ms. Kim. “Today I discovered classical dance, I am so excited; the performance is extraordinary! I feel that the dark part of my heart has brightened up, which is a terrific feeling! I deeply appreciate Shen Yun for bringing such a show,” she said.

As a dance artist, Ms. Kim was impressed by Shen Yun artists’ superb dancing skills. “The props the artists use look so original and unique. … At the same time the artists’ are very agile with their vigorous jumps and flips. Their movements are unforgettable and the performance is flawless!”

Classical Chinese dance “entails systematic training in movements and postures, as well as very difficult jumping and tumbling techniques,” making it one of the most comprehensive dance systems in the world, according to the Shen Yun website.

“The world is Shen Yun’s stage to show Chinese dance and to let us understand what classical Chinese dance really is! Shen Yun needs to tour the world for sure.” Ms. Kin was moved to hear that Shen Yun is not able to travel to China, due to the continued suppression of traditional arts and freedom of expression, under the authoritarian regime.

Ms. Kim also mentioned that she was most impressed with the dance The Choice, which is a story of courage and bravery in modern-day China. “I felt there is a message in this story and my heart ached when I watched it. My heart was struck constantly as I watched all the programs. Everything was excellent!”

Ms. Kim wished everyone could see Shen Yun. “One will regret if they miss such a performance,” she said.