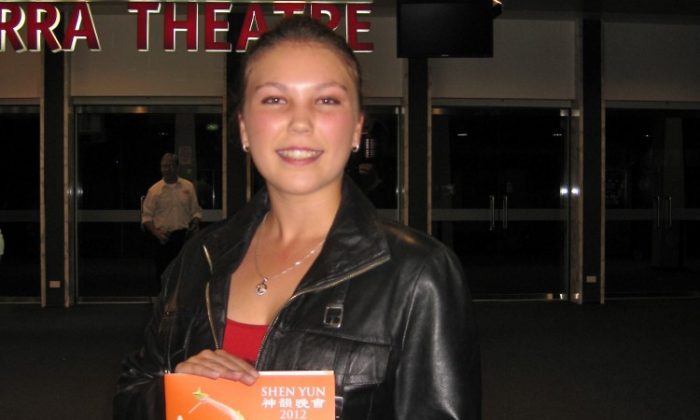 CANBERRA, Australia—Shen Yun Performing Arts New-York Company received two curtain calls and an encore from tenor Hong Ming, who is a winner of awards in over thirty vocal competitions. It was the last of two Shen Yun performances to a packed house at the Canberra Theatre on the evening of April 18.

Among the audience was Mia Van Der Westhuizea, who was one of the principal dancers in the original musical of Beauty and the Beast that was performed in South Africa. The musical was mostly jazz dance, a bit contemporary and obviously a bit of music theatre, said Ms. Van Der Westhuizea.

She thought Shen Yun was “absolutely brilliant and the different way of dancing was enlightening.” She said, “it was the way the dancers moved … it was done so differently that it was all inspiring to see. And the way the clothes moved with it, like when the legs moved up the whole garment flowed.”

The dance Snowflakes Welcoming Spring captivated Ms. Van Der Westhuizea particularly. “When the hands move and when they lift their legs you see their entire bodies moving with their cloaks and their garments. It’s just so different and I’m not used to seeing that, so I really liked it.”

The technical skills in classical Chinese dance impressed her and “the way the girls moved, it was on one level, and I’ve never seen dancers glide like that on one level moving up and down, not just moving, just gliding. The screen, when it moved was perfectly timed, and I even checked the symmetry of the lotus leaves, the way they turned was exactly symmetrical. I really thought it was a brilliant production”, said Ms. Van Der Westhuizea.

On a bright morning, apprentice monks gather to tidy up the temple with brooms, basins and washcloths. Eager to do well, they put their heart into their work—with fun and humorous results, states the program book about the vignette Joyful Little Monks.

“In the scenes with the officers also you see the seriousness and how important it was. The way they used their expressions and even though they were that far, you could see it, everything in their eyes. You don’t always see that in performances because they think they are on stage and far away so that no one will see it so they just smile. There was something different.”

The program book says about the Martial Arts Training Ground vignette, “Each one is a formidable force. Nevertheless, the soldier’s true strength appears when they combine, moving with the might of a mountain”

She was also impressed with the erhu player Xiaochun Qi and the pianist Xin Lian. The erhu is a two stringed classical musical instrument. “I’m also really into classical music and I thought that the way she performed, she wasn’t exactly still, but the way she moved, her bows, you could see that she felt the music and she felt the way the notes were moving, the pianist as well, their postures. It was so good to see a performance like that, and by sitting still you could feel them, they were larger than life.”

Reporting by Deming and Ron Champagne