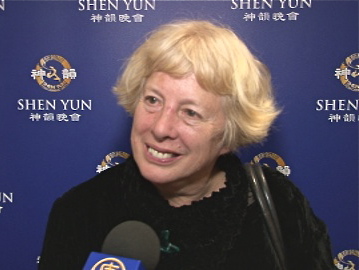 “I’m a dancer, so I’m loving the classical Chinese dance and the technique,” said Ms. Tarrant who is a ballet teacher and director of Footnote, a school of ballet, and principal of the Deidre Tarrant Dance Theatre.

“I know how hard it is, and so they do it very well,” she said, adding that she admired the great precision of the dancers and their synchronicity.

As a dance teacher with over 25 years experience, Ms. Tarrant gave her considered opinion of the performance.

She enjoyed the dance, The Joyful Little Monks, saying that the choreography was excellent.

This dance, which takes place in a secluded monastery, shows how the apprentice monks have fun and play games while they carry out their daily chores.

The Choice tells the story of a young man who is recruited into the police force and then finds that he has to make a moral choice when he realises his friend, a young woman who practises the spiritual practice of Falun Dafa, is being persecuted.

Falun Dafa, is a meditation practice whose followers based their beliefs on the values of truthfulness, compassion and tolerance.

“I think it’s quite a brave performance,” said Ms. Tarrant. “The reason for the arts is to speak. I think it is really important that the artists go on stage and make those statements.

“I love that dance can say things that you can read in many different ways.”

The Tibetan dance, Khata for the God, was also wonderful, she said. In this dance, the dancers step and stomp, spin and soar with joyful, vibrant energy. In their hands they hold the Khata, a traditional scarf presented to guests. Here they offer it to the gods as a sign of reverence and devotion, says the program book.

Sleeves of Silk was also notable for Ms. Tarrant. “The way they handled those sleeves, I know how hard that is,” she said.

She expressed her admiration for the technical aspects in the dance, adding that the dancers were very beautiful.

Performing classical Chinese dance, with its hundreds of poses and movements, as well as the many complicated and difficult flips and tumbling techniques, requires systematic training. Alongside ballet, classical Chinese dance is one of the most comprehensive dance systems in the world, according to the company’s website.

Shen Yun’s performers received an enthusiastic ovation from the audience as well as two curtain calls which brought to an end a very successful evening.