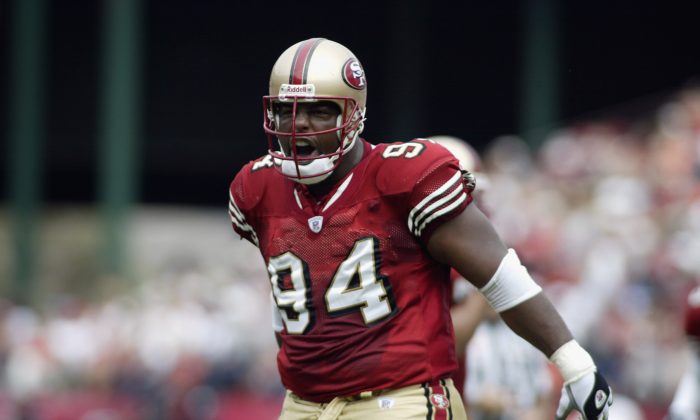 Dana Stubblefield was the NFL's Defensive Player of the Year in 1997 when he was a member of the San Francisco 49ers. (Jed Jacobsohn/Getty Images)
NFL

But Stubblefield’s attorney, Gary Winuk, said Monday that his client had consensual sex with the woman who accused him of rape. The 45-year-old was charged with sexually assaulting the woman last year at his home in Morgan Hill, Calif., where the woman had to come to interview for a babysitter job.

According to prosecutors, the then-31-year-old woman promptly went to the Morgan Hill Police Department to report she was raped.

“This was a crime of violence against a vulnerable victim,” Deputy District Attorney Tim McInerny said. “She was looking for a job and she was unconscionably assaulted.”

Lawyers for former 49er #DanaStubblefield “He’s been unfairly targeted because of his celebrity and wealth” https://t.co/leoZOvTuKh


Kenneth Rosenfield—another member of Stubblefield’s legal team—said the rape charge against his client is “a false and completely untrue allegation.”

“This is nothing but a money grab, and an attempt to get money and take advantage of his celebrity status,” Rosenfield said.

Stubblefield, who was named the NFL’s Defensive Player of the Year in 1997 while starring for the San Francisco 49ers, contacted the woman through babysitter website Sittercity.com. The alleged incident took place on April 9, 2015, according to a Morgan Hill police report.

Then when the woman returned to Stubblefield’s home, the report said she was assaulted and paid $80.

Stubblefield was a first-round pick of the 49ers back in 1993 out of Kansas. A three-time Pro Bowl selection, he played 11 seasons in the NFL for San Francisco, Washington, and Oakland before retiring after the 2003 season.

Off the field, Stubblefield was sentenced to 90 days in jail in 2010 for stealing his ex-girlfriend’s mail. The year before, he was placed on probation for lying to investigators about his steroid use during playing days.