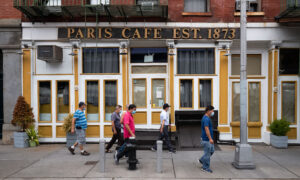 American Navy veteran Dan Crenshaw went on Saturday Night Live on Nov. 10 to accept an apology by Pete Davidson, who last week poked fun at the Republican politician who lost an eye serving in the military.

Davidson began the segment alone on stage, setting up his apology with a self-effacing set-up.

“In what I’m sure was a huge shock for people who know me, I made a poor choice last week,” Davidson said, eliciting audience laughter. “I made a joke about Lt. Commander Dan Crenshaw,” Davidson continued, “and on behalf of the show and myself, I apologize.”

“I mean this from the bottom of my heart,” Davidson said. “It was a poor choice of words. The man is a war hero and he deserves all the respect in the world.”

He added, “And if any good came of this, maybe it was that for one day the left and the right finally came together to agree on something—that I’m a [expletive]!”

Crenshaw then appeared on stage, looked at Davidson and asked “You think?!” as the audience broke out in cheers. The former Navy SEAL then added “Apology accepted.”

The segment saw Crenshaw go on to mock photos of Davidson—as the SNL cast member had mocked photos of him the week before—joking that: “He looks like if the meth from Breaking Bad was a person.”

Davidson caused controversy after mocking Crenshaw in a Nov. 3 segment of SNL.

Wearing a prison outfit, Davidson did a bit while a picture of Crenshaw’s photo was broadcast on the screen.

The segment prompted laughter from the audience but a backlash from many others, including the National Republican Congressional Committee.

“Dan Crenshaw served 10 years as a Navy SEAL. He received two Bronze Stars, a Purple Heart, and the Navy Commendation Medal with Valor,” said committee chairwoman Ronna McDaniel. NBC owes him an apology, we owe him our support on Tuesday.”

The Navy vet lost the eye in a blast from an improvised explosive device (IED) in Afghanistan and only regained use of his other eye after several surgeries, according to his website.

Crenshaw earlier responded to Davidson’s comments in an interview with TMZ and said that he doesn’t need an apology.

“I want us to get away from this culture where we demand an apology every time someone misspeaks,” Crenshaw said. “I think that would be very healthy for our nation to go in that direction. We don’t need to be outwardly outraged. I don’t need to demand apologies from them. They can do whatever they want, you know. They are feeling the heat from around the country right now and that’s fine.”

On the SNL segment, Crenshaw called for a bridging of the political divide and respect for America’s war veterans.

“But seriously, there’s a lot of lessons to learn here,” he said. “Not just that the left and the right can still agree on some things, but also this: Americans can forgive one another. We can remember what brings us together as a country and still see the good in each other. This is Veterans Day weekend, which means that it’s a good time for every American to connect with a veteran.”

He advised all Americans to say “never forget” to a veteran, “implying that as an American, you are in it with them, not separated by some imaginary barrier between civilians and veterans, but connected together as grateful, fellow Americans.”

“And never forget those we lost on 9/11, heroes like Pete’s father,” he added, paying tribute to Davidson’s father, who died in the September 11th attacks. “So I’ll just say, Pete, never forget.”