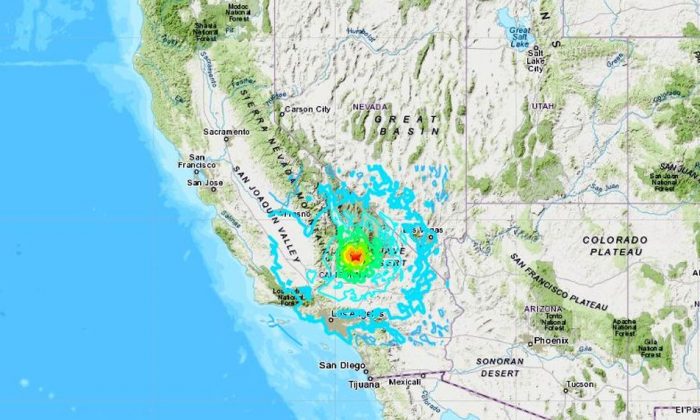 A 6.4 magnitude earthquake struck Southern California on July 4, and a series of aftershocks followed. (USGS)
US News

A 6.4 magnitude earthquake and dozens of aftershocks caused scattered damage across Southern California, it was reported.

The quake was centered near Ridgecrest, located near the Mojave Desert and about 150 miles north-northwest of Los Angeles, said the U.S. Geological Survey (USGS).

After the earthquake, rock slides and fires were reported across the state, CNN reported.

ABC7 reported that a local hospital said 10 to 20 people received minor injuries during the earthquake.

At least 50 smaller aftershocks were reported after the 6.4 magnitude quake, the report stated.

There are reports of scattered damage, including rock slides, fires, downed power lines and cracks in roadways following the earthquakehttps://t.co/uQoGvxI4Ce

Seismologist Lucy Jones tweeted: “The #Ridgecrest earthquake is having a robust aftershock sequence. There have been 6 M4+ events and ~30 M3+ in the first 90 minute. That means there will be plenty more aftershocks today.”

“When the probabilities are this high, then you can say, yes, there will probably be a magnitude 5 today,” Jones said of the aftershocks, according to KTLA.

Jones added that the area where the quake hit had a number of large earthquakes in the 1980s.

“The chance of having a magnitude 5 [in the area] … is probably greater than 50-50,” Jones said. “Some time this afternoon, we’re going to be having a larger aftershock within this sequence.”

The San Bernadino County Fire Department’s said that the community of Trona “sustained varying degrees of damage,” but no injuries were reported.

If you’re safe, tell us if you felt the earthquake, if you see any major damage and if you received a notification from ShakeAlertLA on your phone.

The department also said there were “minor cracks (in buildings); broken water mains; power lines down; rock slides on certain roads” in the county, CNN reported.

CNN posted a photo of firefighters battling a blaze in Ridgecrest, which was apparently sparked by the quake.

Pretty significant #earthquake here in Southern California – 6.4, strongest in years. Rocked the house, stuff fell, but no real damage, except to my wife’s, sister-in-law’s and dog’s psyches. They are SHOOK, but OK.

This is what my usual work spot in Los Angeles looks like after the earthquake. #earthquake #damage pic.twitter.com/9Js7L6z6Oq

“The earthquake was near China Lake and Ridgecrest. It’s is sparsely inhabited area, so the number of people who would have received damage is much lower,” Jones also said.