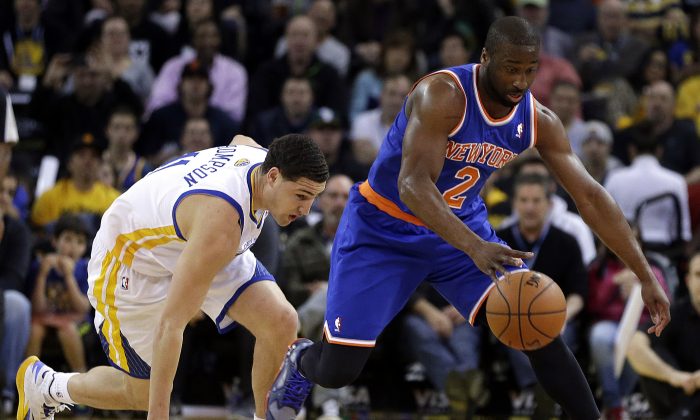 The Dallas Mavericks are on a losing streak and the news and rumors are coming out.

Raymond Felton, acquired in the Tyson Chandler trade, was eligible to play for the first time this season after dealing with injuries then serving a four-game suspension for gun charges levied against him last season in New York, but he was not activated for Monday’s game.

The Mavericks have four point guards.

“The players determine the minutes, by being ready, by how they play in games,” Carlisle said. “We’ve got a good situation.”

“There are a lot of teams right now that would die to have one or two of our point guards. We’ve got one or two extra, which is a great position to be in,” he added.

Felton emphasized that despite being a starter through most of his career he’s just ready to help out where he can.

“That’s not my decision to make,” Felton said. “I’ve worked hard through training camp and I’ve worked hard ever since I’ve been injured, so the biggest thing is whatever Coach and this staff needs me to do, that’s what I’ll do.”

ESPN noted that there isn’t a clear role for Felton since Monta Ellis plays most of the minutes at shooting guard and Devin Harris most of the rest, while Harris, Jameer Nelson, and J.J. Barea all share time at point guard.

“We’ll just have to see,” Carlisle said on Felton’s role.

“There’s nothing definite at this point in time. We got a lot of point guards. We got to give them all a lot of love. It’s really a great situation for us. You look around the league, Indiana’s got two point guards out. We’re very fortunate. Are there enough minutes for all of them? No. But they’re all professionals and they’re all going to stay ready. I feel it’s a very good position to be in.”

Chandler Says Knicks in the Past

Tyson Chandler, brought back in the trade, says that he’s focused on the Mavericks and that “the Knicks are in my rearview mirror.”

“I don’t mean that in a negative way, but it’s in the past, and I’m moving forward,” he told ESPN.

Chandler said that he felt he was the scapegoat at time on the Knicks last year as he struggled to return to top form after injuries.

“I think people can take it differently and make it what they want to make it,” Chandler said when asked whether his leadership attempts were lost in translation in New York.

Mavericks owner Mark Cuban said bringing back Chandler to the team has been great.

“He’s been a great help, great impact on the court, off the court,” he said. “Everything we thought he was, he was.”

Meanwhile, Chandler said that the team has to play better defense.

Chandler said that the Mavs have to focus on stopping players from scoring a lot of points, using Donald Sloan’s 29 on Monday night as an example.

“The focus and the understanding of what we’re trying to accomplish,” he said. “It can’t always be offense. You can’t always try to outscore teams. Some nights, you’re going to have to rely on your defense. But when we can’t buy a stop and they’re playing harder on defense than we’re playing and we start struggling offensively, you don’t win. And you have nights like this.”