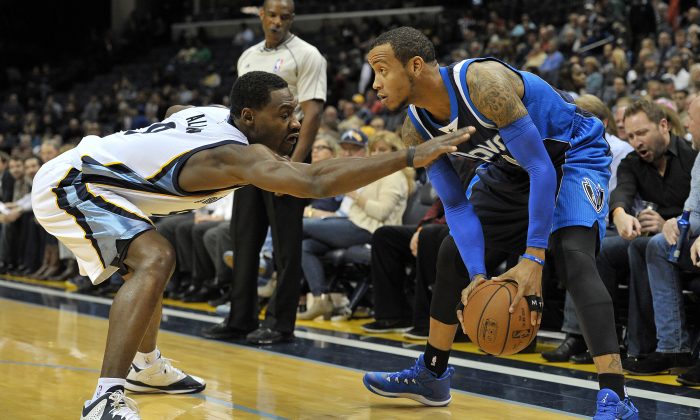 The Dallas Mavericks are coming off a tough loss but have another game on Wednesday, a chance to grab a win.

Monta Ellis has an right elbow injury, but it isn’t expected to force him to miss the game.

“We hope not,” coach Rick Carlisle said when asked if it was anything serious. Ellis was icing the elbow after Tuesday’s shootaround.

Ellis shot just 1-for-11 from the field in the loss to the Grizzlies, and may have to be watched closely. He’s played all 104 games since arriving in Dallas.

“I don’t know if he’ll say it, but it’s obvious it was. Most guys in this league wouldn’t have even attempted to play. It’s a very tough situation for him. Hopefully, it’s more of a day-to-day thing,” Carlisle said later, noting that Ellis might not play on Wednesday.

“If Monta Ellis is limited Wednesday night like he was against the Grizzlies, it’s up to the medical and coaching staff to step in. Ellis will never voluntarily sit to rest an injury. He’d rather give whatever he can to the cause,” noted the Dallas Morning News.

“On Tuesday, he gave 1-for-11 from the field. It was clear the elbow injury he suffered against Milwaukee was bothering him. If there’s not significant improvement, he won’t be able to help the team on the court. Better to give him three days to rest it before Golden State arrives Saturday.”

“Monta gets no respect on his drives ever,” Cuban said. “He gets hit on his body all the time and it’s like nothing. I told him he’s got to flail like all these other guys. I mean, I don’t know how he doesn’t get to the line. It’s crazy.”

The team’s video crew got instruction from Cuban to put together a video of Ellis drives that the team thinks should have resulted in fouls, and will then send it to the league office.

“One off is easy to dismiss,” Cuban said. “When you have a history, it’s more impactful.”

The rest of the team isn’t doing so well, collectively shooting 34.2 percent.

That’s a contrast from last season, when they hit 38.4 percent, good for second in the league.

But Carlisle told Sports Day he’s not concerned about it.

“I think we go through phases where we’re a little hot and cold, unfortunately,” added Dirk Nowitzki, who is hitting 36.4 percent.

“We’d love to be better. I haven’t been great. What you got to do is keep stepping into them. Don’t force any bad 3’s. If they’re there, step into them with confidence. We got good enough shooters that eventually the percentage is going to go back up. But if not, we still want our shooters to shoot them.”

The team did shoot well against the Grizzlies, going 18-40 (45 percent) from behind the arc.