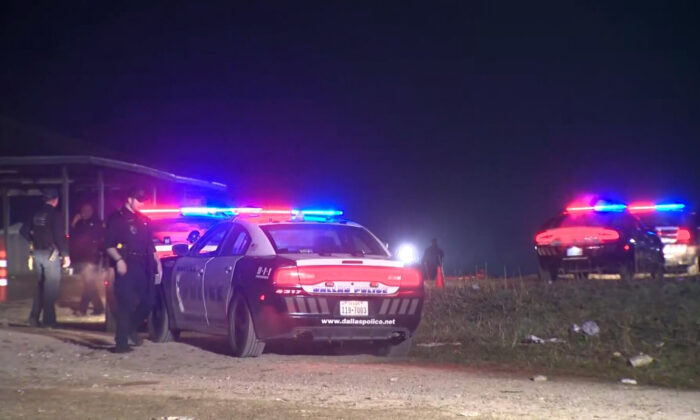 Police on the scene of an overnight shooting at a concert in Dallas on April 3, 2022. (Courtesy of KTVT)
Texas

An outdoor concert in Dallas were one person was killed and 15 others were injured by gunfire over the weekend did not have a permit, Dallas police said Monday.

Police on Monday updated the number injured, saying 15 people were injured by gunfire and one woman was injured but not by gunfire. Police didn’t say how she was injured. Police said those injured ranged in age from 13 to 29.

Police Chief Eddie Garcia said during a Monday news conference that all of those injured were in stable condition.

Garcia said that with “a permit and proper promoter oversight, we can better be prepared for events and crowds.”

He also said that seven Dallas police officers had been approved to work the event off-duty, but that shouldn’t have happened since the event didn’t have a permit. He said they had all left by the time the shooting happened.

Police said they responded Sunday at about 12:13 a.m. to the field in southwest Dallas where a concert was being held. Garcia said that one person fired a gun into the air, then an argument broke out and another person fired into the crowd’s direction.

Near the concert stage, police found 26-year-old Kealon Dejuane Gilmore lying on the ground with a gunshot wound to the head. Gilmore died at the scene.

“People coming to an event should worry about enjoying themselves, not to have fear if won’t make it home,” García said.