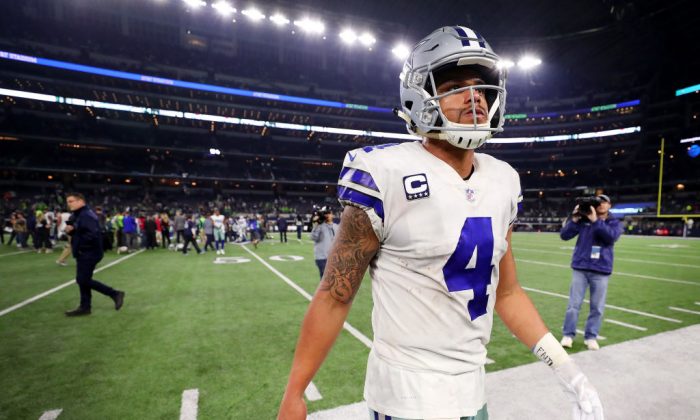 Dallas Cowboys quarterback Dak Prescott said that he’s against the protests that have spread throughout the NFL during the national anthem, which is performed before each game.

The controversy over the protests, which are said to be against police brutality against black people in the United States, has sharply divided the league and prompted many fans to stop watching the games, leading to declining viewership ratings.

Prescott said on Friday that he believes the anthem isn’t the right time for players to protest.

“I don’t think that’s the time or the venue to do so,” he added.

Prescott told reporters that he himself has never protested during the anthem.

“When you bring such controversy to the stadium, to the field, to the game … it takes away from the joy and to the love that football brings a lot of people.”

“Us as a team, we chose to stand together for the national anthem. It was our decision. I think it just shows our culture. It shows that we have unity. We’re going to stand as one,” Elliott told reporters.

The comments come after several recent updates regarding the protests.

The league’s Player Association said in a statement that the group and the league “have been working on a resolution to the anthem issue” but that, while constructive dialogue continues, “we have come to a standstill.”

“No new rules relating to the anthem will be issued or enforced for the next several weeks while these confidential discussions are ongoing,” the association added.

The freeze referred to a new policy the league recently announced that would have allowed players to stay in locker rooms as opposed to being on the field during the anthem.

The policy would have also given individual teams the power to set their own policies to ensure the anthem was being respected.

Also this past week, Cowboys owner Jerry Jones said that his players won’t be allowed to kneel during the anthem.

Asked if he would support players staying in locker rooms, he said, “No, our policy is that you stand at the anthem, toe on the line.”

Jones said that the issue has been problematic for the league and that he wishes it would go away.

“It’s unprecedented, if you really think about it. But like the very game itself, that’s the way it is and we’ll deal with it,” he said.

The stance is a reversal for Jones, who took the field in September 2017 and took a knee with his players after President Donald Trump slammed players for kneeling during the anthem.’

Way to go Jerry. This is what the league should do! https://t.co/yEP1jK57xi