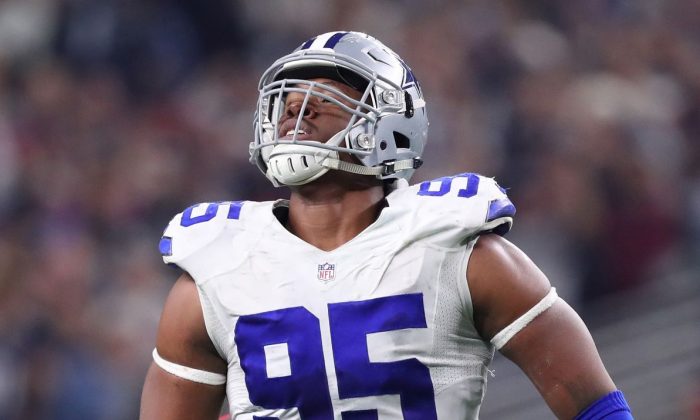 David Irving #95 of the Dallas Cowboys celebrates after sacking Jameis Winston #3 of the Tampa Bay Buccaneers during the fourth quarter at AT&T Stadium in Arlington, Texas, on Dec. 18, 2016. (Tom Pennington/Getty Images)
Entertainment News

“Basically guys, I quit,” Irving said while smoking, Fox News reported. “I’m out of there. It’s a lot of reasons why I’ve come to this decision.”

Last week, Irving was suspended for violating the NFL’s policy on substance abuse. During the 2017 and 2018 seasons, he served four-game suspensions due to his violation of the league’s drug policy.

The Cowboys, meanwhile, said they would not re-sign Irving, 25, in the offseason, reported the Dallas Morning News.

Last season, he played two games and recorded one sack, according to the Morning News.

Irving, in the video, said that he still loves football, but he doesn’t love the league.

I'm just wondering if he will regret this dearly 20-30 years from now.

“But yeah, I’m all right, this is my choice,” Irving said. “I’m living with it. I’m not about to be forced into doing something. I’m not playing for free … I don’t think I’m a bad guy for choosing this route. You know, I stand up for what I believe in.”

“Everyone questions my commitment to football, but let’s get it straight, here and now,” he said, reported ESPN. “I love football. … I wouldn’t be here without it. Don’t get me wrong, I love football. However, I don’t love the NFL. The NFL is not football, you need to understand that. What you all see us do, the game and [expletive], that’s, what, 20 percent of all the real [expletive] we’re doing.”

Irving then made a reference to former San Francisco 49ers quarterback Colin Kaepernick, who hasn’t played for several seasons.

According to the New York Post, his former girlfriend accused him of domestic violence last year. She later recanted the allegations.

Garret instead voiced his support for defensive end Randy Gregory, who was suspended last week for violating the league’s drug policy.

Garrett said Gregory will receive support from the Cowboys as get gets professional help, adding that “sometimes, relapse is part of rehab.”

The NFL Players Association (NFLPA) updated its guidelines on drug testing for 2018 (pdf) and also listed them on its website.

For offseason testing during travel, “testing WILL be conducted at international locations and players are still required to comply with testing while traveling internationally,” the website says. “You will have four hours to provide a specimen after you are contacted by the collector just like when you are state side.”

“If you are traveling internationally you MUST provide the dates of your travel to each location as well as a street address and telephone number where you can be reached at all times,” it also says, adding that players have to keep copies of their travel documentation for four months.

The policy says that most NFL players “need to get tested once a year. A player also gets tested when signing on with a new team and draft-eligible get tested at the NFL Combine,” according to the Baltimore Beatdown website, which went over the rules.

“The standard league test occurs on April 20th, because the league has a nice sense of irony. Knowing what we know about the body taking 30 days to fully process marijuana out of the system, players have until March 20th to get clean,” says the site. “After players get tested on April 20th, they are free to go on and smoke all the weed they want without consequence, so long as they don’t do something stupid like say that they smoke weed, or post of photo online of them lighting up, or get busted by the police with weed on their person.”