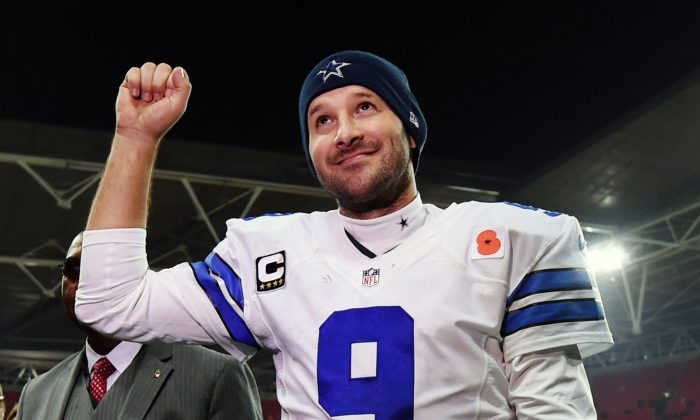 FILE - In this Nov. 9, 2014, file photo, Dallas Cowboys quarterback Tony Romo acknowledges spectators after the team's 31-17 victory over the Jacksonville Jaguars in an NFL football game at Wembley Stadium in London. Romo will play the New York Giants on Sunday night, Nov. 23, then figure out if his surgically repaired back can hold up for the quick Thanksgiving turnaround. (AP Photo/Tim Ireland, File)
NFL

The Dallas Cowboys face the Philadelphia Eagles Thursday at 4:30 p.m. ET on Fox. Here’s some of the latest buzz:

Tony Romo said this week that he’s trying not to let his back injury bother him.

“You don’t really think about it,” Romo said Tuesday, reported The Dallas Morning News. “You just go and play. I mean, everyone has something wrong with them during the football season.

“We say it all the time. Once you step on the field no one cares what you have. You’ve got to go produce. Our job is to play well regardless of what’s going on around you. That’s our job as players.”

Romo’s thrown 22 touchdown passes against six interceptions. Half of those picks were thrown in their game against the 49ers in Week 1.

Romo suffered a back injury against the Redskins on Oct. 27 that sidelined him for a game.

“I think that’s probably been as impressive a statistic as he’s had throughout his career,” coach Jason Garrett told NFL.com. “He’s always been a very productive passer (yards per attempt) that way. Then, when you combine that with the high percentage of completions, you’re obviously going to be productive in the passing game.”

“Well, I’m a fan of RGIII,” Jones told NFL.com. “Right on this field two years ago, or maybe it was three seasons ago, he put on a show and had a game that just floored me. And they won, and they won in large part because of his play at quarterback. I thought ‘my goodness, and we’re going to have to be playing this guy for years and years.’ And so he’s got it.

“Once you see a player do it, especially if you see him do it two or three times, you know he can do it. And of course he’s a driven young man. I’m a big admirer of RGIII.”

In that game, Griffin had 63 rushing yards and 100 passing yards.

Murray says he can keep workload

DeMarco Murray believes that he can keep his pace as the season progresses.

“As the year goes on you feel better and I definitely feel like I’ve gotten stronger throughout the year and I got to continue to work hard during the week and continue to show up on Sundays.”

The Cowboys will play defensive tackle Terrell McClain heavily against the Eagles.

Josh Brent is still working his way back into game shape after his 10-week suspension.

“He’s coming along fine,” Marinelli said. “It’s just that we have some guys who are playing pretty well for us right now, too. So we’ll keep you updated when we feel he’s ready to go and I’ll alert you.”