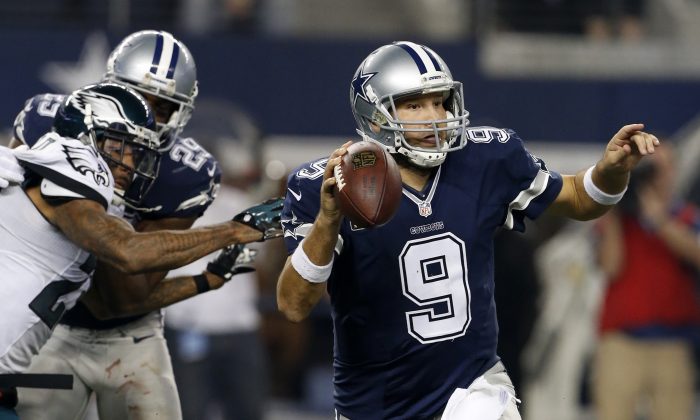 Following a loss to the Philadelphia Eagles, the Dallas Cowboys look to regroup against the Chicago Bears on Thursday. Here’s some of the latest buzz:

An ex-teammate of RB DeMarco Murray has filed for a divorce from his wife, claiming that she cheating on him with Murray.

Brennan Clay said he’s in the process of filing for a divorce, reported the New York Post.

Clay played with Murray with the University of Oklahoma, and posted a series of tweets accusing murray.

He’s been married to his wife Gina D’Agostini for four months.

“So Demarco Murray was having an affair with my wife ..I’m done ..@demarcomurray and @gina_edagos0126 ..1 has a baby momma and she has 2 kids,” he wrote on Twitter. I’m disgusted .. On that note headed to church ..”

Tony Romo, currently suffering from a back injury, said he wants to avoid big hits.

“You’re always weigh the positives to move around and make plays against the negatives that can come from it. A lot of it depends on where the defenders are coming at you. You can recognize very quickly whether you have a chance to escape and find a hole,” Romo told ESPN.

Tomo was sacked four times against the Eagles. In three times, he fell down to the turf before he was hit.

“Probably one time,” Romo said after he was asked if he gave himself up to avoid a big hit.

“I knew the route concepts and what was going on and there wasn’t going to be an ability to create, per se, on the other,” he said.

“I think he’s got a great feel in the pocket,” coach Jason Garrett told the network. “I think you’ve seen him do that throughout his career when he senses there’s nowhere else to go, he goes downs protects the ball and protects himself.

WR Dez Bryant described some of the Eagles’ tactics last Thursday as “cheap.”

“They were being kinda cheap, that’s another story,” Bryant told CBS Local. “It is what it is, I’ll get it cleaned up and I’ll be fine.”

It’s unclear what Bryant was referring to–possibly pass interference or defensive holding. CBS noted that he left the game with a busted up lip.

“I’m really not mad at all,” Bryant added. “They beat us and I’m going to accept that. . . . [I’m] not looking past Chicago, but I cannot wait to go up there and play [Philadelphia] again, cannot wait.”

After being accused of “disappearing” from the Cowboys offense, WR Terrance Williams said he’s still around.

“My confidence is fine,” Williams told the Fort Worth Star-Telegram. “People make it seem like I’ve disappeared from the thing, but I haven’t. We’ve just been spreading the ball around well.

He added: “There’s no reason for me to complain. I’ve been a team player my whole life. To trade in my stats now for wins? That’s fine with me. It’s cool. There’ll be times later on down the road where Tony needs to throw me the ball more and my numbers will pick up. Until then, I’m just going to keep doing my job.”

Williams has caught five balls for 75 yards in the past four games. In that span, he’s has no touchdowns.

“People said I left [Romo] out to dry, but it’s one of those things where I’m fully facing the sidelines and expect the ball, not to be perfect, but in a certain location,” said Williams.

“It got on me too quick and I didn’t really see it until it passed me. If I would’ve known where the ball was there, I would’ve at least put my hands in the air.”s