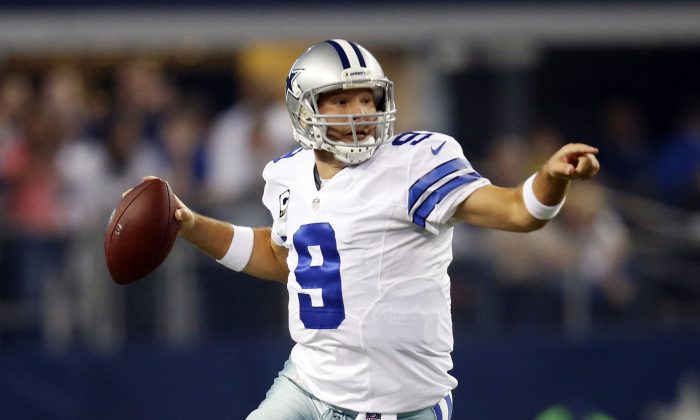 Dallas Cowboys quarterback Tony Romo directs his receivers as he scrambles out of the pocket during the first half of an NFL football game against the Washington Redskins, Monday, Oct. 27, 2014, in Arlington, Texas. (AP Photo/Tim Sharp)
NFL

The Dallas Cowboys had a bye week and sit at 7-3 before facing the Giants next week. Here’s some of latest news and rumors.

Romo made most of bye, says Jerry

Cowboys owner Jerry Jones said Tony Romo made the most of the bye week amid the quarterback’s back injury.

“I think it’s really beneficial, and he knows how to use it,” Jones said Tuesday, via NFL.com. “I think by the time we kick off Sunday, he will have maximized this break for himself and for us.

“I was really pleased he had the outing he had in London. It certainly showed that with a couple more weeks of just simple letting it rest, if no other thing, then he’ll be in better shape in that particular area of his back.”

With his back injury, Romo is in for a rough stretch.

The Cowboys play three games in 12 days starting this Sunday. The Cowboys have back-to-back Thursday night games–including the Thanksgiving Day game against the Eagles–after the Giants game on Sunday.

Dez Bryant reportedly partied at Jay Z’s 40/40 Club on Saturday night after he signed with the rapper’s sports agency.

“He came with his brother and some guy friends,” said one source, per the NY Daily News.

“They were all decked out in Roc Nation gear, really excited and celebrating the fact that Dez was a part of Roc Nation now.”

According to TMZ, Bryant was “poppin’ bottles” of champagne and “flossin’ jewelry.”

Bryant becomes a free agent after this season is over. According to a recent CBS report, he’s frustrated over the contract negotiations.

“I just know what I’m going to accept and I know what I’m not going to accept,” Bryant said. “You know, it’s not about the money. It’s not about none of that. I just feel like a little respect should play a factor in that. I love it [here]. I really do. But every day you grow. Let’s see what happens. It’s all about respect. It’s all about respect. I am a very loyal person, but just don’t test my loyalty.”

Amid his best season as a pro, DeMarco Murray said he’s prepared to take on the responsibility for the rest of the season.

“Like I’ve said before, whatever they ask me to do I’m going to do it times 10. It’s going to be an exciting next couple of weeks for us.”

He currently leads the NFL with 1,233 rushing yards and seven touchdowns.

“I don’t know about anyone else, but I just totally got away,” Murray told the network. “I didn’t watch it. I didn’t concentrate on it. So I’m excited. I think we’re all recharged and ready to go.”

With the weather getting colder, it’s likely that the Cowboys will rush even more.

“Obviously we’re running the ball well, and I think we’re throwing it well, too,” Murray added. “So in this part of the year, it’s cold, the weather, so I think running is going to be a little bit more of a factor for us, which is good. We’ve got a strong offensive line. We’ve got some backs who can run and also got a lot of guys on the edge that can go up and get the ball. So it’s going to be huge for us.”

Adrian Peterson was suspended for the rest of the season by the NFL’s top brass.

There’s been speculation that Peterson, who is a native of Palestine, Texas, will eventually be released by the Minnesota Vikings.

As Fansided notes, “The Vikings would not be able to trade or release the eight-year veteran until possibly April 15, 2015. That’s probably a date Cowboys fans should circle on their calendars.”

It was reported by ESPN earlier this year that Jerry Jones had a conversation with Peterson and allegedly told him that he wants him to retire playing for the Cowboys.

Next Page: Dez Says ‘Don’t test my loyalty’ to Cowboys