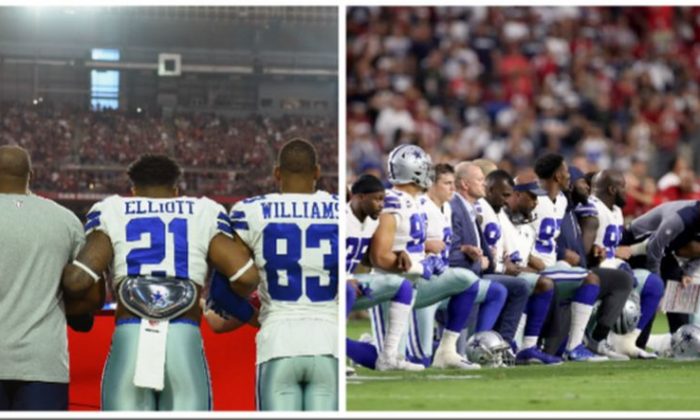 Dallas Cowboys Do Something Different During National Anthem

The entire Dallas Cowboys team took a knee before the national anthem and then stood up and linked arms before it started and held that pose throughout before “Monday Night Football.” They knelt only for about 10 seconds before standing.

Cowboys owner Jerry Jones and his family linked arms and knelt with the players before the anthem.

Many fans in Arizona audibly booed when the Cowboys took a knee.

The Cardinals linked arms with members of the military during tonight's national anthem. pic.twitter.com/twHX1kb2EW #NFL

Dallas Cowboys unite arm in arm, then take knee together before anthem, then stand for anthem. pic.twitter.com/9276XmUL4K

The Cowboys’ opponent, the Arizona Cardinals, linked arms with members of the military during the national anthem.

Since last season, when the anthem protests started, no Cowboys player has protested during the anthem.

It comes after reports that some players would protest during the anthem—following 200 other players around the NFL who protested Sunday. In viral videos posted on YouTube and Facebook, fans could be seen burning their NFL memorabilia.

President Donald Trump over the weekend slammed the players who protested (usually in the form of kneeling) during the national anthem.

He tweeted Monday evening: “Tremendous backlash against the NFL and its players for disrespect of our Country. #StandForOurAnthem”

The president added that Chief of Staff John Kelly, a former general, agrees with Trump’s sentiment.

General John Kelly totally agrees w/ my stance on NFL players and the fact that they should not be disrespecting our FLAG or GREAT COUNTRY!

It comes after a CNN report alleging that Kelly was opposed to Trump’s stance on the anthem, which he derided as “fake news.”

The Cardinals linked arms with members of the military during tonight's national anthem. pic.twitter.com/twHX1kb2EW #NFL