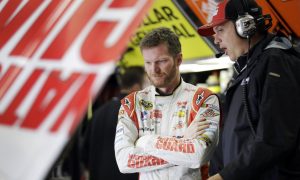 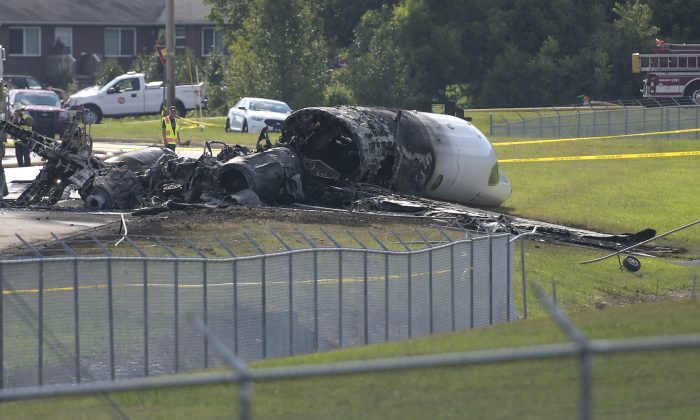 The burned remains of a plane that was carrying NASCAR television analyst and former driver Dale Earnhardt Jr. lie near a runway in Elizabethton, Tenn. on Aug. 15, 2019. (Earl Neikirk/Bristol Herald Courier via AP)
US News

The plane carrying Dale Earnhardt Jr., his wife, and his daughter bounced after a hard landing and left the runway, the Federal Aviation Administration said on Aug. 16, a day after the incident.

The Cessna 680A Citation Latitude crashed as the pilots tried landing at Elizabethton Municipal Airport in Tennessee.

The plane “experienced (a) hard landing, bounced, departed runway and caught fire,” the administration said in the preliminary incident notification.

The plane hit the 4,500-foot runway, exited it, went through some grass next to the runway, hit a ditch, and eventually came to a rest near a road and plowing through a chain-link fence. Everyone survived and no one was injured.

The Earnhardts and the pilots were able to escape before the plane caught fire, National Transportation Safety Board lead investigator Ralph Hicks said at a press conference on Friday.

“When I got close to the airplane, the first person that I came in contact was Mr. Earnhardt. He was laying on his back, but, as far as his injuries, I’ll let his family handle that. But he was alert, fine and didn’t appear to have any cuts or abrasions. He was totally conscious and alert,” Carter County Sheriff Dexter Lunsford said at a press conference on Thursday.

The plane appeared to bounce twice before it exited the runway. “You can visually see the airplane balloon up and come back down,” Hicks told reporters.

He said that two pilots were on board and both were professionally trained. Investigators have interviewed them.

Investigators walked the runway and found skid marks and tire track marks that appear to be from the plane, as well as small pieces of debris.

The board said it would release its preliminary report in about a week and eventually release surveillance footage from the airport to the public.

Kelley Earnhardt, Earnhardt’s sister, said in a statement that everyone on board was taken to a hospital.

“I can confirm Dale, Amy & Isla along with his two pilots were involved in a crash in Bristol TN this afternoon. Everyone is safe and has been taken to the hospital for further evaluation. We have no further information at this time. Thank you for your understanding,” she said on Thursday. “Finally laying down for the night and want to say thank you to God, the angels among us, our pilots, first responders, medical staff, our NASCAR family and everyone that has reached out in whatever way to support us all.”

I can confirm Dale, Amy & Isla along with his two pilots were involved in a crash in Bristol TN this afternoon. Everyone is safe and has been taken to the hospital for further evaluation. We have no further information at this time. Thank you for your understanding.

On Friday, she added: “We want to reiterate our appreciation to the NASCAR community, first responders, medical staff, and race fans everywhere for the overwhelming support in the last 24 hours. Dale, Amy, Isla, and our two pilots are doing well. We are assisting the Federal Aviation Administration and the National Transportation Safety Board in the investigation and will have no further comment at this time.”

Earnhardt Jr., who retired from racing in 2017, now works for NBC Sports as an analyst.

“After being discharged from the hospital, we communicated with Dale and his team, and we’re all in agreement that he should take this weekend off to be with his family. We look forward to having him back in the booth next month at Darlington.”