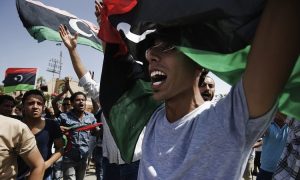 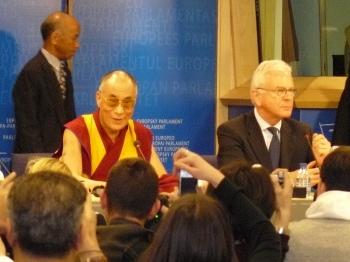 The spiritual leader knows more than any other person how hard it is to reach the Chinese people. Aside from freedom of religion, he emphasized the importance of free media and lamented "…too much censorship, too much censorship." Because of the distortion of information and propaganda spread by the Chinese regime, the Dalai Lama expressed a significant responsibility to explain the truth.

Accordingly to his speech to the European Parliament, the Dalai Lama explained that "as a result of deliberate policies an entire people with its unique culture and identity [is] facing the threat of extinction … because the Chinese authorities view Tibet's distinct culture and religion as the source of threat of separation."

In response of the Chinese regime's claims, he retorted, "Actually the whole world knows we are not separatists, and also many Chinese writers and also many Chinese students. When they have the opportunity to know the reality they are all very supportive, and in fact very critical about their government policy. The Chinese government, however still accuses us of being separatists. Actually we ourselves are confused about this."

In the press conference following the speech, President Poettering stated that he, the European Union and Parliament will keep defending the Tibetan people on the issue of their cultural and religious identity without questioning the territorial integrity of China.

In response to a question about the sincerity of the Chinese regime's willingness to talk to Tibet's representatives during the Olympic Games, the Dalai Lama answered, "Hu Jintao gave us great expectations. But after the March crisis, we were 100 percent ready to talk and help them, to call down the demonstration. But soon after the incident, the propaganda from the regime made it very clear that they were never planning on talking to us."

The Dalai Lama often talks to Chinese professors, businessmen, writers and students from whom he says receives a lot of support. "Even the most patriotic ones know that in order to become a superpower they will have to improve on a moral level," he said. However, the top leadership's hard line ignores that. "They only believe in suppression and guns. It is a total mistake," he said.

Because the Chinese delegation canceled their visit to Europe, President Poettering stated, "There should [be no] conditions for the negotiations and discussions between the European Union and China. If we make conditions we would be behaving a little bit like the Chinese [regime], canceling or suspending a meeting, so this would be the same level, and not advisable."

Concluding his press conference, the Dalai Lama also explained to the media more about the Chinese Communist Party. He said that changes from a socialist totalitarian state to a capitalist totalitarian state wouldn't fundamentally change the party, and he compared the so-called transition to what Deng Xiaoping once stated: "As long as it can catch mice, black cat, white cat, it doesn't matter."

As long as the Chinese Communist Party can keep power and become rich, the Dalai Lama said, any means are fine to them. When asked why he did not meet with the European Parliament during or before the Beijing Olympics, he stated, "I received an open invitation, so I planned it to my convenience, don't think that my every move is political. Even when I drink a glass of water, the Chinese leadership is suspicious and can find some political significance."

"Too much, too much," the Dalai Lama commented with a laugh.