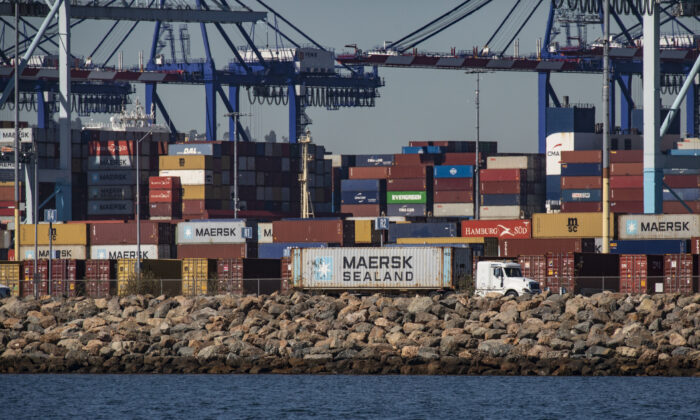 Government officials and food producers sounded the alarm this week over the continuing supply chain snarl, saying many American exporters are unable to get their products to Asia and other markets.

“This difficulty is definitely creating long-term market share loss for U.S. products, and I think that’s important for everyone to recognize,” Andrew Hwang of the Port of Oakland, which exports the majority of agricultural products in California, told a group of industry leaders, agricultural and port authorities and elected officials during a Jan. 31 webinar.

“It is a potential permanent loss of market share around the world.”

“Over 90-plus percent of our export orders were either rolled or missed in 2021,” Mike Durkin, president and CEO of Leprino Foods Company, said at the webinar. “On a normal year, that would have been 10 percent.”

Orders were missed as many as 17 times or backed up for almost five months, Durkin said. The company was also forced to send products to some customers via air freight to avoid delays.

In New Mexico, where the Leprino Foods Company operates one of its larger plants, the loss of agricultural exports has hit rural communities.

“According to American Farm Bureau Federation, there has been a loss of $1.5 billion in agriculture exports due to the congestion. This hit home for New Mexico, with our many dairy, chile, pecan, and onion farms, as well as a host of other agricultural industries,” Rep. Yvette Herrell (R-N.M.) told The Epoch Times in an email. “Like much of rural America, New Mexico’s Second Congressional District has felt the brunt of the pandemic and the supply chain crisis.”

Herrell was one of the co-sponsors of the Ocean Shipping Reform Act that passed the U.S. House of Representatives in December. The bill revises ocean shipping policies to support growth and development of U.S. exports and promote reciprocal trade. The Senate has yet to vote on the bill.

“Many shipping companies have not been honoring their commitment to send American agriculture abroad, breaking contracts to quickly send back empty shipping containers to China to import more cheap goods from our communist adversaries,” Herrell said.

Overall, $2.1 billion was lost in California export business, according to White House representative John Porcari, assigned last year by the president to work with ports to improve supply chain issues.

“Agricultural exports are being disadvantaged right now,” Porcari said at the Jan. 31 webinar. “That is unacceptable.”

“There is no question that the vaccine mandates are creating difficulty,” Eisen said.

A backup of empty containers at all ports was also slowing the supply chain, he said.

California Congressman John Garamendi (D-Northern Calif.), also emphasized the need for shipping reform. He asked if the White House could put more pressure on the major shipping companies in China, Taiwan, and Korea that operate the majority of ships exporting goods from Oakland, Long Beach, and Los Angeles ports.

“This is an international trade issue of extraordinary importance to my district. … Is this administration putting any pressure on those countries to make this right for American shippers?”

Porcari said the U.S. State Department and other agencies were engaged in talks with other countries to “make clear what the nation’s objections are.”

Garamendi said the work so far was not effective, as exporting empty containers to Asian markets had increased from 40 to 70 percent last year.

“This issue is here and now,” Garamendi said. “They’re going to lose their markets. I think we need to use every lever available, and that is putting pressure on those ocean shipping companies.”

About six farmers or shippers in Garamendi’s district may not survive the year because they can’t get their products on ships, he said.

“Let’s twist arms and do whatever is necessary to get those folks into the Port of Oakland to pick up those containers,” Garamendi said.

The U.S. Dept. of Agriculture this week announced a new program at the Port of Oakland that will dedicate a 25-acre site where agricultural companies can fill empty containers. The department will pay $125 of each container cost, according to Agricultural Secretary Tom Vilsack.

In Los Angeles, the port is working with the dairy industry and shipping companies to create a Dairy Exports Working Group to find ways to streamline exports, increase rail availability, and possibly start a “fast lane” for ships that agree to depart with full or fewer empty cargo containers.