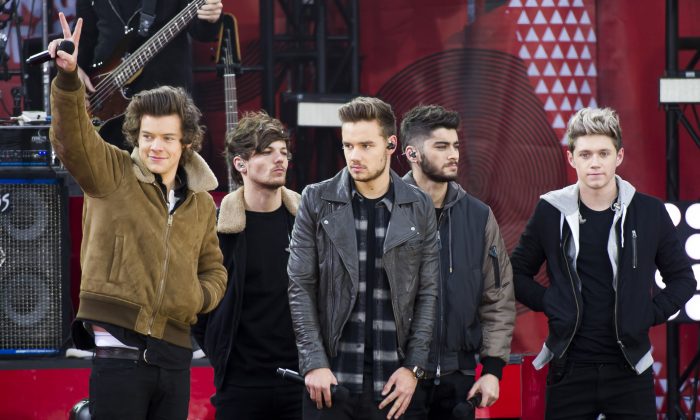 The Daily Show on Tuesday did a segment on terrorism and in the process, made fun of One Direction.

The comedy show  did a segment with correspondent Jessica Williams, and she talked about a few terrorist organizations, which included to al-Qaeda, Hamas, ISIS, the Zetas drug cartel, and then showed One Direction as a joke.

Williams doesn’t mention Zayn Malik, but members of One Direction’s (mostly teenage girl) fanbase apparently didn’t get the joke, tweeting about it with the “#TheDailyShowGoneTooFar” hashtag.

Some people thought that because Malik is a Muslim, the band shouldn’t be linked with terrorism.

“I am so disappointed with @TheDailyShow !How could them use the word ‘terrorist’ associated with #onedirection ?” one person wrote.

Said another, “I watch your show but Zayn from One Direction is very sensitive about his religion so he keeps quiet about it. Apologize.”

Some of the fans wanted to get the Daily Show “shut down,” while some of the comments were borderline threats.

Added another: “@TheDailyShow why don’t you apologise for saying such racist remarks about a member of one direction.”

Said another, “I JUST FREKIN RETWEETED THE VIDEO OF THE DAILY SHOW N IM LIKE WTF CME ON THTS NOT FUNNY TO INVOLVE ONE DIRECTION IN A TERRORIST GROUP!!”

After that, users were posting up photos of Malik doing charitable acts and sponsoring donation drives.

But many people pointed out that it was just a joke.

“Just the Daily Show #. I would like to say that I am 99% certain they randomly picked One Direction as a silly thing to add to the list,” wrote one.

Said another, “The reaction is what The Daily Show wanted; to prove that One Direction fans are stupid.”

For their part, none of the members of One Direction have responded to the Daily Show backlash.