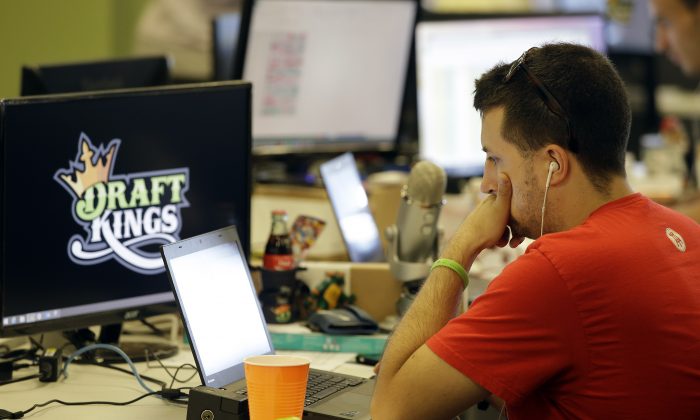 Customers of the two biggest daily fantasy sports websites, DraftKings and FanDuel have filed at least four lawsuits against the sites in October of 2015, following cheating allegations. (AP Photo/Stephan Savoia)
US

And that was just Schneiderman’s latest batch of national headlines this year.

He’s investigated energy companies over whether they misled investors about the risks global warming posed to their business. Several national retailers stopped putting workers on call for short-notice shifts after Schneiderman questioned the practice. And he shook the herbal supplements industry with DNA tests he says showed that product labels lied.

“One of the amazing things about this job is: We can go from anti-trust law to busting up a gun-trafficking enterprise in the same day,” the Democrat told The Associated Press in an interview this past week.

Still, some question whether Schneiderman’s moves are as much about profile-building as protecting the public. His two immediate predecessors in the attorney general’s job have moved on to the governor’s office.

“He’s gone way over the line” with the fantasy sports probe, said Republican Assemblyman Dean Murray. He said he usually approves of the AG’s work, but “we have so many forms of gambling. Why go after this?”

Schneiderman says the answer is simple: New York law bans taking bets as a business, with exceptions for horse racing, casinos, state lotteries and certain other settings, but not daily fantasy sports sites.

“The fact that there have been exceptions made to the rule against gambling doesn’t mean that they can create their own exemptions simply by defying the law,” he said.

He said the ban doesn’t apply to sites that host traditional, season-long fantasy sports leagues and don’t profit from or process wagers, even if participants often vie for a pot of winnings they handle themselves. But daily fantasy sites make payouts and take a cut of participants’ stakes. And people can play anew every day, rather than anteing once for a whole season, he noted.

“You can do it from an app on your phone, any time of day or night, drunk or sober,” notes Schneiderman, who says his move was prompted partly by concern about gambling addiction. “It’s more dangerous, I think, than a brick-and-mortar casino.”

Boston-based DraftKings and New York-based FanDuel say Schneiderman is miscasting their business as gambling — defined in New York as risking “something of value upon the outcome of a contest of chance” — when they say it’s really a game of skill.

Both companies asked a judge Friday to block Schneiderman’s order and declare their businesses aren’t gambling. DraftKings called Schneiderman’s efforts “an irresponsible, irrational, and illegal campaign to destroy a legitimate industry.” FanDuel has said the attorney general went after it just to “get himself some press coverage.”

Not that the 60-year-old Schneiderman has been a stranger to media.

After taking office in 2011, the former state senator and Harvard Law School graduate became a key figure in dealing with the fallout from the 2007-08 mortgage meltdown. When he rejected a nationwide settlement with major banks that would have shielded them from future investigations, he got booted from an attorney generals’ negotiating committee but got kudos from liberal groups.

And Schneiderman tangled with Donald Trump, accusing the real estate mogul and now Republican presidential candidate, in a 2013 lawsuit of helping run a sham “Trump University” that didn’t deliver on apprenticeships and other promises. Trump defended the program and called Schneiderman a headline-hungry “political hack.” The case is not yet resolved.

This month, Schneiderman used a novel application of a state securities-fraud law to press energy companies to be more up front about the business risks of climate change.

Meanwhile, Schneiderman subpoenaed documents from Irving, Texas-based Exxon Mobil Corp. for a similar probe he says could be “much broader.” The company has rejected the suggestion that it’s been deceptive about its own global warming projections.

Officials Order Fantasy Sports Sites to Shut Down in Nevada

To some extent, Schneiderman is following in the path of attorneys-general-turned-governors Eliot Spitzer and Andrew Cuomo, who cast the office of the state’s chief lawyer as a muscular watchdog of Wall Street and other matters that resonated nationally.

“We have ambitious politicians, elected to statewide office (as AGs), who think the public wants them to be prosecutors and think that will be a way to advance politically,” says SUNY New Paltz political scientist Gerald Benjamin.

As for Schneiderman, he has said his only political plans are to run for re-election in 2018.