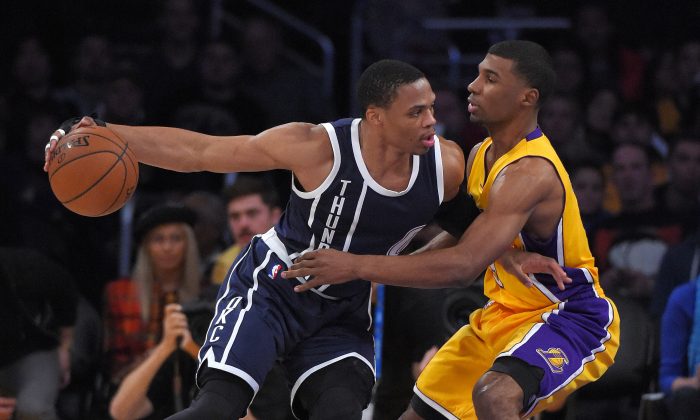 Things must be getting really tough for the older guys on the Spurs, having now played two 3-OT games in a row.

Tim Duncan played 43 minutes after playing 48 minutes versus the Grizzlies Wednesday, though finishing with another vintage Duncan line of 32 points, 10 rebounds, 2 steals, and 4 blocks on 12/24 shooting.

Manu Ginobili continued to struggle with his shot, coming off the bench for 11 points, 5 rebounds, 5 assists, and 6 turnovers on a horrific 5/17 shooting.

Both Duncan and Ginobili will consequently rest and not play in Saturday’s game against the Mavs(Rajon Rondo’s Mav debut).

As for the Spurs’ young guns, Danny Green added 21 points 10 rebounds, and 6 three-pointers on 9/21 shooting, while Corey Joseph added 10 points, 8 rebounds, and 7 assists filling in for an injured Tony Parker

But, the story of the night was the Trail-Blazers and their superstar point guard Damien Lillard, who scored a career high 43 points on 16/29 shooting, adding 4 three-pointers, 3 rebounds, 6 assists, and 4 steals. You can see his full highlights here. LaMarcus Aldridge was equally dominant with 32 points, 16 rebounds, and 5 steals.

Wes Mathews also provided a decent line outside of the shooting, with 16 points, 7 rebounds, 5 assists, and 2 three-pointers on 5/19 shooting.

In their first game without Rajon Rondo, all five starters played a balanced game in their win over the Timberwolves.

Point totals for the starting lineup:

Kelly Olynyk added 21 points, 8 rebounds, and 2 three pointers on 8/13 shooting off the bench.

Of the aforementioend players, Olynyk should definitely be owned, Bradley should probably be owned, and Zeller is worth a look in deeper leagues. Evan Turner is likely not worth an add, as his starting spot will belong to Marcus Smart once Smart is ready to roll. Smart should be owned in standard leagues.

For the Timberwolves, Shabazz Muhammad continues to be used like a superstar, finishing with 26 points, 5 rebounds, 5 assists, and 2 three-pointers on 11/15 shooting. He should definitely be owned.

Andrew Wiggins continued his rookie struggles with 5 points, 4 rebounds, and 2 assists on 2/10 shooting. Wiggins is only shooting .389 from the field and .706 from the line, and it’s clear that while he’s getting minutes, his game is still raw for the NBA level.

Chase Budinger is a good short-term look for owners in need of threes. He had 19 points and 3 three-pointers on 8/12 shooting last night.

The usual crew for the Clippers performed as expected.

For the Nuggets, Nate Robinson exploded in just 15 minutes off the bench, finishing with 20 points, 5 rebounds, 3 assists while shooting 4/9 from long range. Robinson is still not a recommended add due to his limited minutes.

Tyson Lawson‘s assist streak continues to continue; he double-doubled with 10 points and 14 assists.

Overall, the Nuggets were paced by a balanced effort.

Point totals for the starting lineup:

With Kevin Durant out, Russell Westbrook shined in a victory over Kobe Bryant and the Lakers, scoring 31 points, 5 rebounds, and 10 assists on 9/22 shooting and 13/13 from the line. Kobe only scored 9 points on 3/15 shooting in 35 minutes.

Afterwards, Kobe stated that “he didn’t have his legs”, so the grind of the season may be wearing down the 36-year-old star.