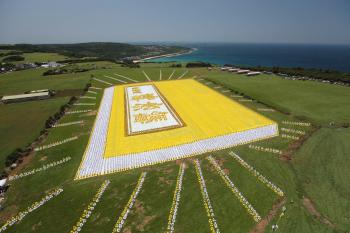 On the morning of May 9, over six thousand Falun Gong practitioners gathered at the Puding Prairie in Kenting, Taiwan, and lined up to form an image of the book “Zhuan Falun,” the basic text for Falun Gong. (Wu Bohua/The Epoch Times)
Opinion

The practitioners who first organized WFDD were focusing on what is permanent and beautiful rather than on the temporary and ugly things happening in China. They knew that the good Dafa had brought to the world was far more important than the persecution inflicted by the Chinese Communist Party. WFDD is an expression of faith made in the very face of calamity.

The joy of the occasion derives from the practice of Dafa itself. Falun Dafa is a traditional Chinese spiritual discipline for mind and body. It involves slow, gentle movements and meditation. Its principles are based on Truthfulness, Compassion, and Tolerance. Falun Dafa teaches that these are the most fundamental qualities of the universe itself and takes them to be a guide for daily life and self-improvement.

When the practitioners of Falun Dafa encounter difficulties or conflicts, they look inside themselves to seek out their own responsibility for what is happening. They try to take lightly desires and personal interest and seek in everything the well-being of others first. By cultivating harmony inside themselves, Falun Dafa practitioners help bring harmony to the families, work places, and communities to which they belong.

They also enjoy remarkable health benefits, benefits acknowledged with awards given to Falun Dafa by the Chinese state before the persecution began. Nearly every Dafa practitioner has a story to tell about the health improvements he or she has experienced—in some cases these improvements are quite extraordinary,.

By 1999, Falun Dafa, spreading only by word of mouth, had attracted 100 million practitioners in China and had spread to over 30 countries worldwide. Falun Dafa is now practiced in 114 countries (counting Hong Kong, Macau, and Taiwan independently of the People’s Republic of China), and Dafa’s main books are available in 38 languages.

Today tens of thousands of people around the world are publicly celebrating WFDD.

While Dafa practitioners celebrate, the persecution in China continues. The U.S. State Department 2007 International Religious Freedom report estimates that one-half of all those held in China’s notorious labor camps—hundreds of thousands of people—are Falun Gong practitioners.

The U.N. Special Rapporteur on Torture, Mr. Manfred Nowak, reported that 66 percent of all reports of torture received by the U.N. involved Falun Gong practitioners.

According to the Falun Dafa Information Center, over 3,000 practitioners have been confirmed as having died from torture and abuse. Because such deaths are considered “state secrets” and information about them is obtained at great personal risk, the number 3,000 significantly understates the true number of deaths from torture. In addition, tens of thousands are believed to have been murdered through having their organs taken for use in organ transplantation.

However, the persistence of Falun Dafa in China in spite of this brutal and evil persecution vindicates the faith of those who began WFDD. The regime beats Dafa practitioners, but their spirits remain free. This is something the atheist Chinese regime cannot understand. The freedom of Dafa practitioners comes from knowing and living according to universal principles, from rising above ordinary concerns, and from treating everyone with compassion.

World Falun Dafa Day is an opportunity for people around the world to think about the momentous events taking place in China and the persistence of the free spirits and the joy of Falun Dafa practitioners. It is a chance to get to know Dafa. And it is a chance to take a stand—with those who disgrace humanity with torture and oppression or with those who bring humanity grace and freedom.