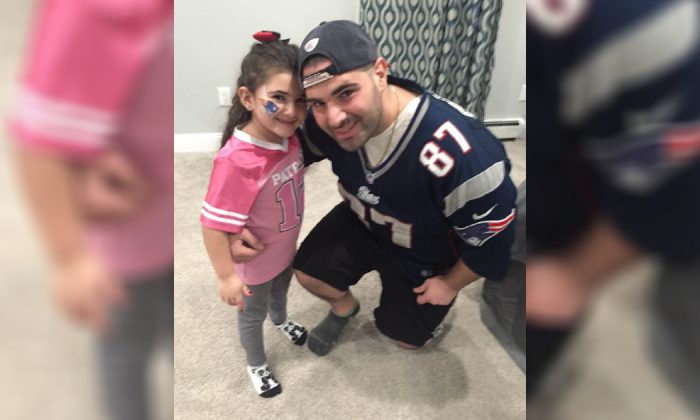 A Connecticut man’s incredible performance has impressed fellow guests at Walt Disney World Resort as he spontaneously broke into song in Orlando, Florida, on March 20.

Justin Gigliello from North Stonington caught many people by surprise when he accepted a request from his daughter, Lyla, to sing along with a pianist who was playing at the lobby of Disney’s Grand Floridian Resort and Spa.

Lyla had asked the pianist if her father could sing along.

“He asked her what song and she requested the ‘Ave Maria,’” said Gigliello, who works as an administrative manager.

The father’s unexpected talented attracted a big gathering from many who could hear him singing in the hotel lobby, earning a roaring applause at the end of the song.

Gigliello started taking singing lessons from the age of 15 and, according to his Twitter profile, he later completed a bachelor of voice performance at the Boston Conservatory at Berklee in Boston, Massachusetts.

“I’m a huge fan of Andrea Bocelli, Josh Groban, and Michael Bublé,” he later told Fox News. “Some of their pieces are what I sing daily in the house with my daughter.”

A Facebook video of him singing has gone viral, sharing his talent to a world-wide audience where has has become an internet sensation.

“We just went to Disney World last week and my daughter asked the pianist at the Grand Floridian if I could sing while he played,” Gigliello said in a Twitter post dated March 26. “This is me singing Ave Maria. I hope you enjoy.”

Hi all,
We just went to disney world last week and my daughter asked the pianist at the Grand Floridian if I could sing while he played. This is me singing Ave Maria. I hope you enjoy! @WDWToday @DisneyInterns @DisneyD23 @disneyauditions @Disney @TheDailyDisney @disneyparksjobs pic.twitter.com/IGj1ao01Ut

WATCH: A man is going viral after video shows him singing #AveMaria at a @WaltDisneyWorldresort — and the look on his daughter’s face is priceless! STORY: https://t.co/1gaEIyry5d 📹: Justin Gigliello

Many people who watched Gigliello’s video on social media felt very moved after watching him sing.

“That was amazing! Beautiful voice,” Candaice Robinson Wiggins said in a Facebook comment on the video. “The way that Lyla was looking up at you was precious!”

“Awesome! This is why I love all things Disney. If you ask, they will do just about anything to make their guests happy,” Helen Cassata said.

A dad with a voice of angel goes viral after video shows him belting “Ave Maria” at Disney World 🎵https://t.co/8uZ5DEuqY8 pic.twitter.com/UYQyX0p0wp

Others agreed with Gigliello that his daughter enjoyed the song very much.

“Amazing Justin. Your daughter is so proud to be there with you. Love it,” Johanne Pino said.

“Talk about a smile and a song! Thank you for sharing this magical moment,” Walt Disney World Today said in a Twitter reply dated March 26.

Although Gigliello has risen to a kind of stardom, he has revealed that Lyla’s delight in watching him perform is the real reward for him.

“She is part of my inspiration to continue my journey,” he said. “I know for sure she’s my number one fan!”

Representing Tom while in FL with my family. I sang Ave Maria with my daughter in Disney and it is going viral! I wore a Seahawks jersey but don’t worry Pats are still my number 1! I hope you can listen! @Patriots pic.twitter.com/DfB9p2Q0zC