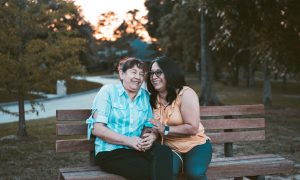 Stock photo of an ambulance in Toronto. (Michael Gil via Wikimedia Commons)
Australia

A message written by a heartbroken father whose daughter died last week has gone viral.

Bill Gillett of Australia took to Facebook on Jan. 26 to express his grief after his daughter, Ebony, died. According to him, she left behind three children, aged 18 months, 5, and 9.

“What can I say? The last 48 hours… I don’t think I can put into words,” he wrote, adding that the woman killed herself.

Thanks to everyone for their kind and heartfelt messages.What can I say? The last 48hrs I don't think I can put into…

“Suicide does not discriminate and there is just so much of it happening,” Gillett stated

“For the ones left behind there are so many unanswered questions. There are now three beautiful young girls without their mother,” he also said.

“And for a parent it would have to be their worst nightmare. This might sound harsh, but I want this to be a big reality hit… and that is the job of having to identify your child then having to bury that child before yourself.”

That’s something, he added, he wouldn’t wish on anyone.

He said he doesn’t want his daughter’s death to become another suicide statistic, saying he would rather raise awareness about suicide and mental health.

“So the one thing I do ask of everyone that has read this is this: Let’s not be afraid to talk about suicide, depression or anxiety and really start to check on those who might be struggling or going through some heavy [expletive],” Gillett added.

"Suicide does not discriminate and there is just so much of it happening. For the ones left behind there are so many…

“I don’t have the answer as to how we can stop this from happening but if we can help just one person from taking that final step then it might be a small step in the right direction.”

Meanwhile, he suggested that social media isn’t a replacement for human contact.

“And finally while I understand social media can be a useful way of getting these messages out there, let’s also take a step back and use our phones to call people and talk to them, or go and see them and really take a little time to check on everyone old-school style,” Gillett wrote.

This is so sad. Suicide does not discriminate 💔

He later confirmed the details to the Daily Mail.

"There are now 3 beautiful young girls without their mother."

Also in Australia, a teenage girl took her own life hours after sending her friends a message on social media in which she said she was being bullied.

Rochelle Pryor, 14, from Perth, Australia, was desperate for help after allegedly being bullied at school. She wrote to several friends, “Once I’m gone, the bullying and the ­racism will stop” before she attempted suicide, reported The Australian. It was late and only one friend replied to the message.

“After that happened, she was upset and scared and said she didn’t want to go to school anymore. She really went downhill,” Paterson told the newspaper. No charges were laid following an investigation, a police spokesperson said.