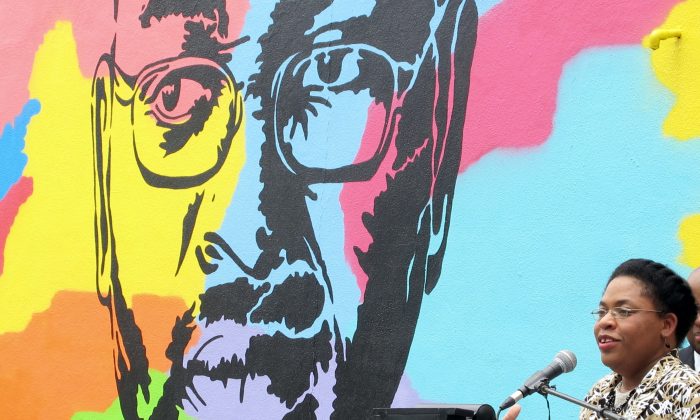 In this file photo, Jennifer Pinckney speaks beside an image of her late husband, the Rev. Clementa Pinckney, one of the victims of the shooting at Charleston's Emanuel AME Church, on May 13, 2016. (AP Photo/Bruce Smith)
US

CHARLESTON, S.C.—For about 20 harrowing minutes, Jennifer Pinckney huddled under a desk with her 6-year-old daughter, her hand clasped over the girl’s mouth to keep her quiet as Dylann Roof opened fire. Not knowing for certain if the danger had passed, Pinckney dialed 911 and breathlessly told an operator she had heard shots inside Charleston’s Emanuel AME Church.

“I think there’s been a shooting. I’m in the closet, under a desk,” Pinckney told the operator. “Please hurry.”

The conversation was played in court Wednesday for jurors considering whether Roof should be sentenced to death or life in prison. Roof, who is representing himself, hasn’t put up any fight for his life, saying he doesn’t plan on calling witnesses, and he has not cross-examined anyone.

In the tape, Pinckney is heard trying to comfort her daughter Malana, a precocious child who had been watching cartoons in her father’s office as he participated in Bible study in the room next door on the night of June 17, 2015.

“Daddy’s dead?” Malana is heard asking her mother on the 911 call.

But at that moment, Pinckney said she knew her husband, church pastor Clementa Pinckney, was killed because otherwise he would have come to check on her and their daughter.

Jennifer Pinckney was the first witness called by prosecutors in the sentencing phase of Roof’s trial. The same jury that last month found the 22-year-old white man guilty of 33 federal charges, including hate crimes and obstruction of religion, is hearing testimony this week in his sentencing trial.

Roof spoke directly to the jurors for the first time Wednesday, insisting that he is not mentally ill. In brief remarks, the soft-spoken defendant told the jury he was not trying to keep any secrets from them. He did not offer remorse or seek forgiveness or ask them to spare him from a lethal injection.

“My opening statement is going to seem a little bit out of place,” Roof said calmly as he stood at a podium, occasionally glancing at notes. “I am not going to lie to you. … Other than the fact that I trust people that I shouldn’t and the fact that I’m probably better at constantly embarrassing myself than anyone who’s ever existed, there’s nothing wrong with me psychologically.”

Roof’s attorneys have indicated that he chose to represent himself during the sentencing phase of his trial because he was worried his legal team might present embarrassing evidence about himself or his family. As early as last summer, they said they planned to introduce evidence that Roof suffers from mental illness and they hinted at that idea again during closing arguments of the trial’s guilt stage.

“I would ask you to forget it,” Roof told jurors, referring to what his lawyers said then.

Prosecutors said Roof deserves the death penalty because he painstakingly chose to target vulnerable people at Emanuel AME Church in the June 2015 attack. He sat with church members for about 45 minutes and waited until their eyes were closed in prayer before opening fire.

He told Polly Sheppard that he wanted to leave her alive to tell the world he attacked a historic black church because blacks were “raping our women and taking over the nation.”

The panel has heard from Roof before in the form of his confession to the FBI and his racist manifesto. And on Wednesday, prosecutors read from a journal found in Roof’s jail cell six weeks after his arrest, projecting a handwritten page on screens in the courtroom.

“I remember how I felt when I did these things and how I knew I had to do something and then I realize it was worth it,” he wrote. “I would like to make it crystal clear. I do not regret what I did. I have not shed a tear for the innocent people I killed.”

Prosecutors have said they plan to call up to 38 people related to the slain and the survivors, work that will continue in court Thursday. Friends of Clementa Pinckney, including Rev. Kylon Middleton and fellow state Sen. Gerald Malloy, also spoke about him in court Wednesday.

Before the 911 call was played, Jennifer Pinckney described her husband as an affable figure who was widely respected in his roles as a state legislator and preacher and who was a goofy family man in private with his two young daughters.