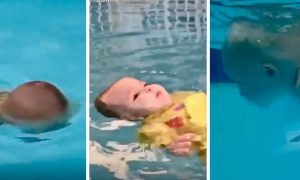 We love our family members, but sometimes it’s necessary to play a few jokes on them as well. In this video, friends and family members play harmless, yet outrageously funny jokes on the people they are closest to. Sometimes it’s a way to get them back for prior jokes, while other times it’s just because it’s too funny to resist.

In the first part of the video, a dad who was previously pranked by his daughters decides to play a prank of his own. On a snow day when school is closed, he gets the kids up, has them get dressed for school, packs their lunches and drives them to school. When they arrive and walk towards the entrance, he finally reveals that it’s a snow day and there is no school after all.

In the second portion of the video, a sister tells her brother she learned a magic trick and can make water disappear. She has him hold a broom up in the air against a bowl pressed against the ceiling. When the boy drops the bowl, there is no water in it and he is shocked and surprised (and maybe knows he’s been pranked a little, too).

The last part of the video shows what happens when a guy opens his refrigerator to find someone inside ready to trick him. Laughter and a bit of a scare are the results of this encounter.