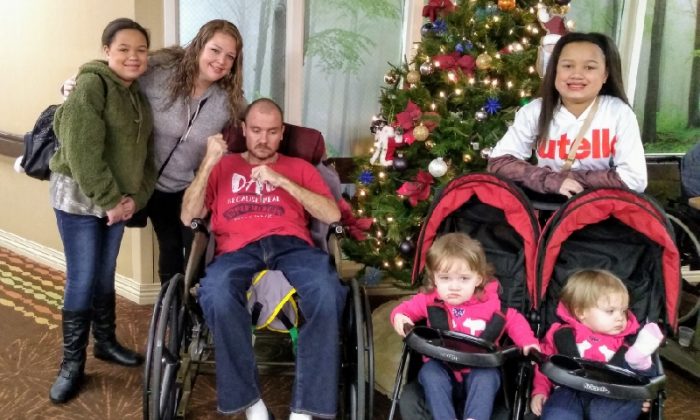 Tony Gibson passed away on Jan. 30, 2019, after battling Creutzfeldt-Jakob Disease, which is known as the human form of mad cow disease, for about a year. (Danielle Gibson/GoFundMe)
US News

A father-of-four from Tennessee has died after battling a rare degenerative brain disorder that he was diagnosed with about a year ago.

Tony Gibson, 33, passed away on Jan. 30, at an assisted living facility near his home surrounded by family. Doctors at Vanderbilt University Medical Center diagnosed him with Creutzfeldt-Jakob Disease (CJD), which is known as a human form of mad cow disease. The disease impacts one person in every one million per year worldwide.

Tony’s story was first reported by local media in December last year when his wife tried to raise awareness about the disease.

The 33-year-old’s wife, Danielle, said she started noticing something was wrong with her husband more than a year ago when he began experiencing rapid memory loss, she wrote on a crowdfunding website.

“He would get so confused I would have to label the rooms in our home,” she said. After a month of testing at the Vanderbilt University Medical Center, Tony was diagnosed with the fatal disease—which currently has no cure. He was given six to twelve months to live.

“I couldn’t believe it. I never expected something like this, never even heard of it,” Danielle told PEOPLE magazine.

Danielle told the magazine that during Tony’s final days, he was unable to walk, talk, or communicate. But she said her husband was fighting until his last breath.

“I was so heartbroken. I feel an empty hole. Everything reminds me of him. Every time I look at our babies, I think about how they’ll never know him,” she said.

Just one day before his death, Danielle posted a video of herself singing Amazing Grace—Tony’s favorite hymn—to him next to his bedside.

Singing his favorite hymn has such a calming affect #AmazingGrace #CureCJD 💜💜💜

In a recent update on GoFundMe, Danielle thanked everyone who supported her family through the difficult time.

“I would like to ask for prayers of strength and peace, especially for our daughters. Tony has always been so strong. He fought a damn good fight,” she wrote. “Our hearts are broken but we take comfort in knowing this fight is over.”

According to the National Institute of Neurological Disorders and Strokes, there are about 350 cases of the disease per year in the United States. The disease usually appears later in life at around age 60 and about 70 percent of individuals die within one year.

Doctors told Danielle at the time it was rare for the disease to have affected someone at such a young age, reported Fox 2.

At the beginning stages of the disease, patients exhibit failing memory, behavioral changes, lack of coordination, and visual disturbances. As it progresses, mental deterioration becomes pronounced and involuntary movements, blindness, weakness of extremities, and coma may occur, according to the institute.

The most common form of CJD is sporadic where there are no known risk factors for the disease. It accounts for 85 percent of all cases. Other forms of CJD include genetic, which is inherited through family members, and acquired, which is transmitted by exposure to brain or nervous system tissue.