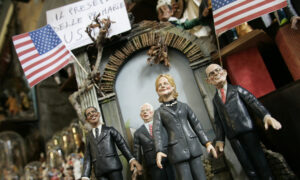 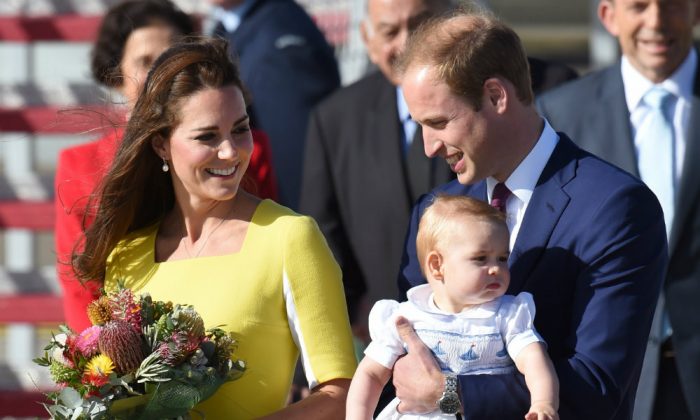 Britain’s Prince George (C) is held by his father Prince William (R) as his mother Catherine, the Duchess of Cambridge (L), looks on at Sydney airport on April 16, 2014. (William West/AFP/Getty Images)
Opinion

It’s almost Father’s Day, a time when many of us reflect warmly on the role our fathers and grandfathers have played in our lives. It’s no secret that dads are important, and that their role as caregivers has, for many families, broadened in the last 50 years. But there’s one period of our development where dads tend to take a back seat—the first nine months, to be precise.

While still in the womb, babies are generally considered to be the mother’s domain. Fathers are often relegated to a small supporting role: they help around the house, maybe massage mom’s aching back, and cater to cravings, but ultimately they’re seen as just another observer. However, a growing body of research shows us that fathers can have a much deeper influence on their children in utero than previously expected.

Recently, several researchers and we conducted a study examining what effect support from spouses had on pregnant mothers’ responses to stress. To do this, we asked participating mothers a series of questions assessing the support they get from their husbands/partners: how much of it, how easily they provided it, and how effective it was at getting them through life’s challenges.

Next, we collected a series of saliva samples from mothers at various times of day. These samples provide a relatively nonintrusive way to measure levels of cortisol, a hormone generated by the body in times of stress. During collection periods, mothers answered more questions, these ones assessing their level of psychological distress, defined as feelings of anger, anxiety, depression, or fatigue.

Through our data, we observed the relationship between the stress hormone cortisol and psychological distress. Sure enough, when mothers were distressed, their samples showed higher levels of cortisol—but only if they also scored low on measures of support from their partners. Moms with supportive spouses showed consistently low cortisol levels, regardless of how upset they may have been when the sample was taken.

Fathers didn’t stop mothers from feeling upset or anxious from time to time, but their support directly affected how their partners’ bodies reacted to and dealt with that anxiety. At first glance, this might not seem like a big deal. If you still feel the distress, what difference does the presence of a few natural chemicals make? To your baby, a great deal indeed.

In sustained doses, cortisol can weaken children’s developing brain architecture. Brains are like houses: their upper stories—the reasoning and cognitive skills—can only stand when the foundation beneath them is solid. Cortisol, if left unchecked, erodes this foundation, and can lead to all kinds of psychological, emotional, and even physical problems, many of which linger into adulthood.

More troubling still, the mechanism that controls the flow of cortisol in our bodies—the stress response system—doesn’t fully develop until a few years after we’re born. Until that time, parents are responsible for modulating their children’s stress levels, making dad’s role all the more important.

And of course, support doesn’t come from fathers alone. Though our study looked at fathers specifically, siblings, parents, friends, and extended family can all help bolster mothers in times of stress. We are social beings by nature, and all of us, whether consciously or not, have a hand in raising each other’s children.

As we contemplate the support and guidance our fathers have given us throughout our lives, it might be worth thinking a bit farther back than we normally do where dads are concerned—farther back, indeed, than we can even remember.

Nicole Letourneau is an expert adviser with EvidenceNetwork.ca and a professor in the Faculties of Nursing and Medicine. She also holds the Norlien/Alberta Children’s Hospital Foundation chair in Parent-Infant Mental Health at the University of Calgary. Gerry Giesbrecht is an assistant professor of Psychology in the Department of Pediatrics at the University of Calgary and lead author of the study published in Psychosomatic Medicine. This article previously published at www.troymedia.com.