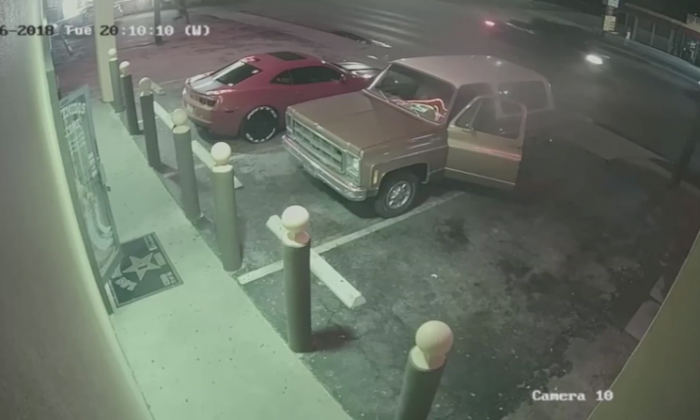 Dad Fights Back Carjackers Who Targeted Family for Their ‘Swangas’

A Texas dad was forced to shoot at a pair of crooks who tried to carjack his car with his wife and two children inside.

The man believes the carjackers were after his “swangas,” a street term for fancy wire spokes mounted on car wheels. A set of swangas can retail for thousands of dollars.

The family parked near a taco stand in Houston at around 7 p.m. on Wednesday, Feb. 7, ABC13 reported. The dad went to the stand to buy tacos. When he was returning with the food a gunman confronted him.

“My daughter had told me mom I thought he was going to kill daddy. My daughter said that. My 8-year-old,” the mother told ABC13. “Oh my gosh. It was horrible. You know he had the gun to my husband’s head. It felt like a nightmare. I’m like I can’t believe this is happening.”

The gunman demanded that the family get out of the car. The dad resisted while the mom pulled the kids to safety. Then the dad went to grab his gun.

The whole ordeal was recorded on a security camera at a nearby business.

“I always carry a weapon in the cars,” the father told ABC 13. “As I started walking back, he jumps in the car. So when he jumped in the car, I went around the back of the car. I pulled the gun out. I loaded it. I put my hands inside the car and shot him.”

The dad believes he shot the carjacker in the hand. The crook then dropped the gun and fled.

“I did what I had to do to protect my family,” the dad said.

“The first thing that came to my head is to get my kids out. I love my kids,” said the mom.

Houston police are investigating and say they are looking for three young men in their late teens to early twenties.

The family chose to remain anonymous for their own safety. The mom described one of the suspects as a thinly built Latino about 5 feet 6 inches tall. The man couldn’t be older than 20 and had a thin mustache, she added.

The other carjacker appeared to be in his early twenties with a medium build and a fade.

Police are asking anyone with information to call Crime Stoppers at 713-222-8477.