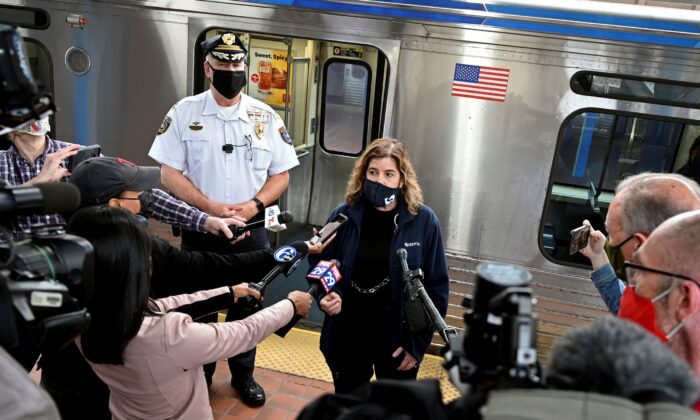 DA: ‘Not True’ That Train Rape Case Witnesses Filmed and Did Nothing to Intervene

A Pennsylvania prosecutor on Thursday pushed back against the narrative that Philadelphia subway riders filmed the rape of a woman on Oct. 13 and did nothing to intervene.

Delaware County District Attorney Jack Stollsteimer, who is leading the case, made the remarks during a press briefing as he urged witnesses to come forward, stressing that they would not be charged.

Claims that witnesses filmed the incident “for their own gratification instead of calling the police” is “simply not true,” Stollsteimer told reporters.

“There is a narrative out there people sat on the El train and watched this transpire and took videos of it for their own gratification,” Stollsteimer said, using a local nickname for SEPTA’s Market-Frankford line.

“That is simply not true. It did not happen. We have the security video from SEPTA that shows that was not the true narrative,” he added, pushing blame on Southeastern Pennsylvania Transportation Authority (SEPTA) officials.

“I think it really came from SEPTA officials,” Stollsteimer said. “I saw the video where they talked about ‘these people,’ acting like there was a group of people just callously recording this incident.”

The attorney said that under Pennsylvania law, individuals cannot be prosecuted for simply witnessing a crime.

The news conference was held days after police and SEPTA officials said that several bystanders appeared to point their phones in the direction of the incident.

Upper Darby Police Superintendent Timothy Bernhardt said over the weekend that there were passengers present during the incident who “should have done something.”

“There were people witnessing the act with phones in their hands,” SEPTA Police Chief Thomas J. Nestel said at a press conference on Monday. “People were holding their phone up in the direction of this woman being attacked.”

A SEPTA spokesperson told The Epoch Times in an emailed statement that it doesn’t have any comments to add beyond what was said earlier this week.

“We continue to urge passengers to call 911 if they see something happening that they think isn’t right, or to use one of the emergency call buttons on board,” the spokesperson added.

Fiston Ngoy was arrested last week following the incident in Upper Darby. The 35-year-old reportedly came to the United States in 2012 on a student visa that was later terminated after he ended his university studies. He also has a criminal record, Tucker Carlson first reported on his program “Tucker Carlson Tonight” on Wednesday.

Ngoy has two prior misdemeanor convictions, including one related to sexual abuse. He entered immigration detention in January 2018 but was later released.

He has claimed the acts were consensual, while the woman said Ngoy ignored her pleas to stop. Investigators have said surveillance video shows the woman pushing Ngoy away multiple times.

Ngoy has a preliminary hearing scheduled for Oct. 25 and is currently being held under a $180,000 bond. He is charged with rape and several related offenses.