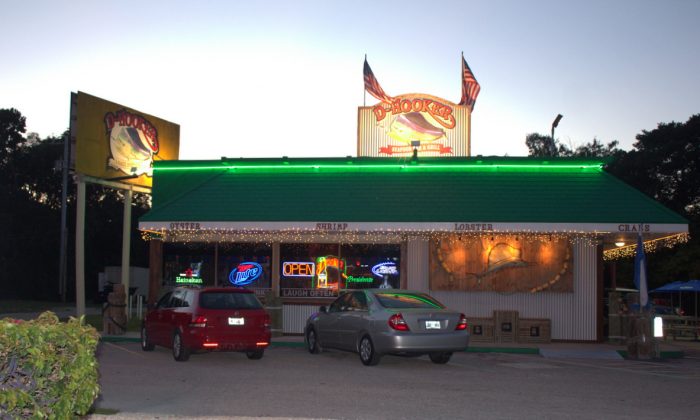 D-Hooker: That’s a Funny Name for a Restaurant

“D-Hooker.” Restaurant owner Steve Bencomo laughed when he explained it. “There’s a kind of tool fishermen use when a hook is buried deep in a fish’s mouth to get it out. It is like long nosed pliers, called a dehooker.” The restaurant’s red neon sign at Mile Marker 102 along U.S. 1 on the bay side in Key Largo, Florida, certainly arrests the eye. A Mahi Mahi in bright neon relief accentuates the logo. They specialize in locally caught fish.

“We buy it fresh from fishermen in Key Largo. We get Mahi Mahi, yellowtail snapper and hog fish. We are the only fresh fish restaurant with a sports bar. We have an NFL package so get all the games, all the pro and all college games,” Steve said.

Twelve large screen televisions grace the walls. There is a long fully equipped bar and ample tables. We were seated by server Ashtyn Isaak at a comfortable banquette. The wooden tables are unique. Gold stylized lettering with a golden fishhook is formed under the restaurant’s name from the K to the R. The lettering is perfect. It is what one would find on the transom of a classic wooden boat. In the middle of the table is a nautical chart. The varnished table provided as much interest as mounted fish and beer logos around the walls. A large mounted bull shark stood out over the bar. An American flag is hoisted on a deep sea fishing pole and reel. Utensils are served in a small white paper sack.

While the restaurant has been in business in Key Largo for some time Steve Bencomo only took it over three months ago. “We hired all new staff. It is all about customer service and fresh fish. It’s a sports bar so we have baby back ribs, wings, burgers. We serve fish in sandwiches and on platters,” the new owner added. It is hard to find people with Steve’s zest and enthusiasm.

His mother and father came to Miami from Cuba in 1961. Steve was born and raised in Miami. His father set up an industrial catering business. Steve worked in the family business that provides food for senior citizen centers, charter schools and some municipal facilities. “Since I was twenty years old I wanted to have a business like this. I’m moving permanently to Key Largo in two months.”

The restaurant business is in Steve’s blood. “My family owned Sundays on the Bay in Miami. Hurricane Wilma knocked it out. We had Cuban restaurants. This is what I always dreamt of and it came to be.”

There is something for everybody on the menu. Their appetizers are all made from scratch as are their soups like conch and clam chowder and lobster bisque. Ceviche from the raw bar includes fresh fish, shrimp and conch marinated in lime juice and garlic. There are baked oysters Rockefeller served a half-dozen on the half shell for $14.99. Steamed mussels are $12.99 and special peel and eat pink shrimp are served by weight, a pound for $19.99.

Main fish courses can be prepared to taste. Snapper, Mahi Mahi, yellow fin tuna and hog fish are filleted. Diners have a choice of fried, grilled or blackened. A special, when available, is whole fried yellowtail snapper. Locally caught the whole fish is spiced and fried until crisp, $24.99.

Steve is justly proud of his kitchen and food storage areas. “Inspectors tell us we have the cleanest kitchen in the Keys. We’re known for the coldest beer in the Keys.” Steve showed off his keg cooler kept at 25 degrees F. “Beer goes out ice cold,” he said.

We chose a plate of D-Hooker’s baby back ribs. The meat flaked off the bone it was so tender and delicious. When Steve was asked for his secret he averred that the ribs are slow cooked for two hours. They are removed until ordered then braised with sauce and placed on the grill.

For stone crab lovers D-Hooker gets them in fresh from local trappers in nearby Islamorada. The stone crab legs are cooked for 25 minutes in a steamer then the basket is placed in ice water for five minutes. “The ice water causes the meat to separate from the shell. The claws turn from dark to orange color when they are cooked,” he explained.

The hog fish encrusted with Caribbean seasoned bread crumbs was sautéed and topped with tomatoes and scallions. The delectable fish came to table with parsley potatoes and mixed fresh vegetables.

Some might want to try D-Hooker’s Man vs. Burger Challenge. A record was set at three minutes twenty six seconds by a patron that devoured the entire burger and fries. Any customer that can break that record gets the burger for free along with a stylized D-Hooker T-shirt. Be prepared for a hearty triple decker of 1 1/2 pounds of beef.

Don’t miss D-Hooker’s home made Key lime pie. It comes classically made, tangy and tasty. Steve also prepares a fried Key lime pie. If you are tempted by their wings the menu offers mild, medium and hot sauces. Watch out for the Straight-Up Habanero. “I have one customer that comes in and orders it every time. He eats the wings like they were not spiced at all,” Steve laughed.

D-Hooker Restaurant is easy to find right off U.S. 1 at Mile Marker 102 on the bay side. Be sure to ask Steve what he recommends. Everything is caught fresh. The staff will prepare your choice the way you like it. If you happen to be in the area when your favorite team is playing enjoy the game on their big screen TVs. The food is always great, the owner affable and enthusiastic. Visit their website at www.d-hooker.net or reach them by phone at 305-451-4105.

Trump Mulls White House Bid in CPAC Speech: ‘I May Even Decide to Beat Them for Third Time’
0