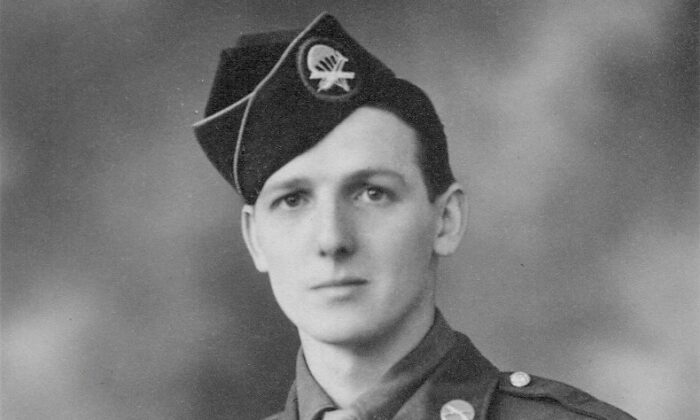 D-Day Veteran Immortalized in ‘Band of Brothers’ Dies at 101

A World War II veteran who parachuted into France with Allied troops on D-Day and was believed to be the last remaining member of the “Toccoa Originals” immortalized in the HBO mini-series “Band of Brothers” died on Sept. 11.

Jim “Pee Wee” Martin was 101, a fitting number as he joined the 101st Airborne Division in 1942 when the division was formed.

It was D-Day, just after midnight on June 6, 1944, when Martin made his first combat jump. Floating to the ground from a plane over Nazi-occupied France facing heavy fire from the Nazis below, he landed at the drop zone behind Utah Beach.

Martin was part of the 101st Airborne’s 506th Parachute Infantry, also known as the “Screaming Eagles.” After his division landed in Normandy, they fought their way through France, parachuted in Operation Market Garden into the Netherlands, participated in the Battle of the Bulge, liberated a concentration camp, and helped seize The Eagle’s Nest, which was Adolf Hitler’s Bavarian home.

Martin was the subject of a book, a documentary, and a song that was released in June, around the time that he told his story to The Epoch Times.

He was awarded the Bronze Star, Purple Heart, and European African Middle Eastern Service Medal for his service, but Martin preferred not to talk about that. Instead, he remembered the relationships with his fellow Screaming Eagles.

“When you are in a foxhole and under heavy fire, all you have are your friends who are with you, and those become strong relationships,” Martin said. “For 50 years or so after the war, we all remained friends and saw each other on occasion. I miss them.”

In 2019, Martin wrote a letter that he asked to be posted on his Facebook page after his death.

“At the time I am writing this I have lived more than 97 years. When I was a boy, I could not have imagined living such a long life. You are reading this because I have recently passed on.

“My interactions with those who view this page and with many others who I have met in person over these last years has brightened my later life more than I can tell you. The level of interest shown by younger generations in our wartime service has gladdened the hearts of my WWII generation. So many of you have worked in a variety of ways to ensure that the legacy and lessons of World War Two will not be forgotten. We old veterans are aware of it and we appreciate it. We know you will continue after all of us are gone.

“I thank my family and friends for the support I have been given. Many friends have visited and made sure I was never lonely. At the time of Donna’s passing, we had been married nearly 73 years. How fortunate I was to have her for so long.

“I have been privileged to know a great many young people. As a result, I am confident in your futures.

“As for the future of this Facebook page. Doug Barber is a (retired) history teacher and was my friend and traveling companion for many years. I leave it to his judgement as to how long the content of this page continues to serve a positive purpose now that I am gone.

His 100th and 101st birthdays were commemorated with “jump fests.”

Friends, family members, and supporters parachuted out of historic C-47s to commemorate the veteran’s gift of another year.

On the 70th anniversary of D-Day in 2014, he parachuted at the same spot where he landed on that history-changing day. He last jumped two years ago at the age of 99.

Martin was given the nickname “Pee-Wee” by his fellow paratroopers because of his slight stature. The nickname was a badge of respect, he felt.

Fascinated with parachute jumping and submarines, Martin explored both interests when he entered the war.

“When I was 5, I saw a parachute jump at a county fair in Bedford, Indiana, and thought it would be fun to try, but I was passionately interested in submarines,” he told The Epoch Times in the June interview. “I was accepted into the Navy, but they told me it would be six months before the submarine was ready. I couldn’t wait that long, so I went across the hall and signed up to be a paratrooper.”

At the time, a paratrooper was a new type of soldier, and the 101st Airborne was just formed. Martin was assigned to Camp Toccoa, Georgia, where he joined the 506th Parachute Infantry Regiment and embarked on a demanding training program under Col. Robert Sink.

The training was so intense, Martin recalled, that he was one of 6,500 when it started, but only 1,650 remained when they deployed overseas.

“We hated Col. Sink while in training. But when we got to combat, we saw why he did what he did [with training],” Martin said. “He stayed with us all the way through. We started together, worked together, and went into combat together. We were a cohesive unit.”

The 101st had more training in England before the moment arrived for Operation Overlord, or D-Day.

At 23, Martin was among the oldest in his group and surrounded mostly by teenagers.

Not knowing what to expect as they dropped onto the northern coast of France in the darkness of night, they landed at Drop Zone D, otherwise known as “the slaughterhouse.”

“We jumped right on top of them, and some guys were killed,” Martin said. “We lost a colonel and a company commander.”

There was mass confusion when they gathered after reaching the ground; they weren’t sure where they were. One soldier climbed a pole for a clearer view, and they started walking down a path.

“There were banks on each side, German artillery and U.S. artillery both were shooting at us, and the place was littered with bodies,” Martin recalled.

“There were more German forces than expected,” he said. “We were initially told to give three days of hard fighting, and then we would be out and onto the next objective. We were there for 33 days.”

Operation Market Garden in Holland, which was Martin’s second combat jump, and the Battle of the Bulge, with its fierce fighting amid bitterly cold temperatures and snow, followed.

When he returned home from the war, Martin met Donna, and the couple married in 1946. They were husband and wife for 72 years and raised a family on the same tranquil country land where he lived until his death; Donna preceded him in death.

In 2021, Emmy Award-winning filmmaker Tracie Hunter released “A Rendezvous with Destiny,” a documentary based on Lt. Col. Jos Groen’s book, “Three of the Last Screaming Eagles.”

The book and film feature Martin, Dan McBride, and Dick Klein and focus on the history of the 101st Airborne Division and the three veterans’ shared experiences of D-Day, Operation Market Garden, and the Battle of the Bulge.

On June 3, the most recent tribute to Martin was unveiled. Nashville-based country recording artist Karen Waldrup released “Normandy,” a song that resulted from teaming up with Martin and listening to his story.

On his 101st birthday—April 29, 2022—Waldrup presented Martin with a battery-operated jukebox that played the song amid a large crowd.

The creation of a life-size bronze statue featuring Martin’s likeness is in the works and will be unveiled in a park near his home. Honoring Martin’s request, a plaque including the names of everyone who served in the 506th will be part of the monument. The status will be part of a veterans’ memorial park that will honor all those who served.

Even after celebrating his 101st birthday, Martin continued to share his story so that current and future generations can understand the Screaming Eagles’ path from D-Day all the way through arriving at Hitler’s Eagle’s Nest. He remained as humble as his mind stayed sharp about his wartime experiences.

“I’m not a hero, and none of the guys feel we are heroes,” Martin told The Epoch Times. “A hero is someone who does something out of character with no training and no worry about his own personal safety, like a person who stops to get someone out of a burning car. We volunteered for this. We trained for this.

“When you live in a country like this, it’s your obligation to go when you are called. I consider it an honor and privilege to be part of history,” he added. “We went over there with the Allies to get rid of a tyrant in the world. The world would have been a different place if this had not happened.”

A memorial service for Martin was to be held on Sept. 20; he will be buried at the Dayton National Cemetery in Ohio on the grounds of the Dayton VA Medical Center on Sept. 21.