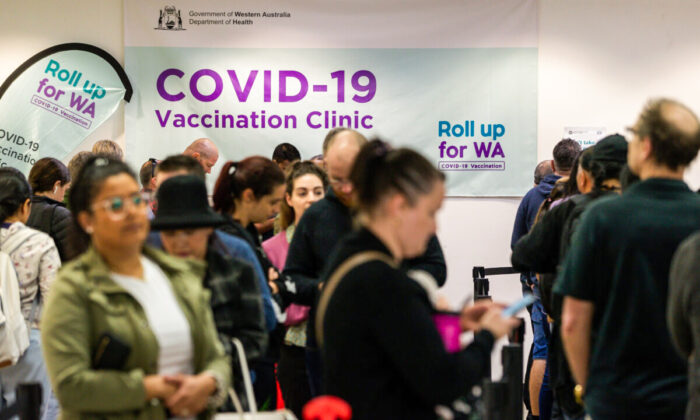 Members of the public wait to be vaccinated at a COVID-19 mass vaccination clinic in Midland, an eastern suburb of Perth, Australia on Sep. 9, 2021. Western Australia currently has the lowest percentage of people double-vaccinated in the country. (AAP Image/Richard Wainwright)
Viewpoints

We may assume that the worse of all those COVID-19 restrictions and emergency powers have finally gone in Australia. However, this is not entirely so, particularly in Western Australia (WA), where vaccine mandates remain in place and thousands of local workers across numerous industries have either stood down or are being stood down.

In this context, in October last year, WA Police Commissioner Chris Dawson, soon to commence his appointment as the new Governor of Western Australia, imposed a harsh policy forcing all non-vaccinated police officers and police staff to have two COVID-19 vaccine doses by Jan. 1 or face summary dismissal.

As a result, WA police officer, Senior Constable Ben Falconer, decided to challenge these mandates and successfully secured a Supreme Court injunction for officers who refused to subject themselves to this sort of measure.

On Dec. 24, Justice Jeremy Allanson granted Falconer an injunction preventing the commissioner, until trial, from carrying out his serious threat to sack him for not being vaccinated by the deadline. Commissioner Dawson, after initially stating that the judicial decision applied only to Falconer, then relented and gave an undertaking that all unvaccinated police officers would not be dismissed until after the outcome of the trial.

On Dec. 23, it emerged during another hearing that all public sector mandatory vaccine directions in the state are the same as those for the WA Police Force. Therefore, the lawyers for Falconer received instructions to commence several other proceedings in the Supreme Court against the Chief Health Officer Dr. Andy Robertson.

These proceedings challenge the chief health officer’s directions applying to workers in a range of industries including education, construction, mining, fire and emergency services, health, corrections, and critical infrastructure. They have been held over, pending the outcome of Falconer’s challenge.

The trial was initially listed for March 29 but, at an urgent hearing the day before this was due to start, Ken Pettit S.C., counsel for the state’s chief health officer, communicated that his client would no longer be called to give evidence at the trial. This about-face appears, to any reasonable person, to be a very clear attempt to avoid any form of scrutiny.

At that urgent hearing, Falconer’s counsel Shane Prince S.C. argued that the chief health officer’s withdrawal had deprived his client of the crucial opportunity to cross-examine him on an affidavit filled early March, and so the trial would not be fair if it proceeded in the way proposed by Pettit.

In a troubling backdrop to this important legal challenge, internal emails to WA Police employees asking for their thoughts on vaccine mandates were allegedly wiped from all staff inboxes without explanation.

Former police officer Jordan McDonald sent this survey on Feb. 27 to approximately 90 percent of the entire workforce. About 300 responses had already been received, out of which 60 percent manifested opposition to these mandates.

A spokeswoman for WA Police stated the organisation was not interested in the opinion of their employees.

The WA Police administration would not conduct a similar survey because, in her words, this would be “a waste of resources and would not change the agency’s mind.” She dismissed any concerns some officers might have, stating: “The commissioner will not speak on behalf of [these officers]. They are entitled to their opinions, however, when it comes to enforcing laws and abiding by workplace regulations there’ll be no debate.”

This disregard for the opinion of police officers may explain why a great number of experienced, senior police officers have decided to leave the profession in Western Australia. As referred above, the entire police force was forced into double vaccination by Jan. 1, or face dismissal. There have been no less than 236 resignations between January and May this year. By comparison, there were only 149 resignations of police officers in the whole of 2019.

Astonishingly, Dawson, who will leave the top job in a matter of weeks, seems oblivious to everything that is occurring. He attributed this dramatic increase in resignations solely to “strong labour market and job opportunities, in some cases with higher pay, elsewhere!”

Problems in the Workplace?

This survey was seeking to identify the reasons for so many resignations this year. According to the results, the primary reason for the resignation was the “disturbing lack of empathy from senior executives in the police force.”

Indeed, this union survey revealed that at least 77 percent of all the officers who resigned over the last five months blamed “poor culture and dissatisfaction with WA Police management” for their decision.

In one submission, a member said the “WA Police Force management doesn’t care about its people.” In another, the respondent stated: “I participated in an internal interview in which was treated worse than how we’re expected to treat suspects. The whole system is broken.”

These findings help understand why the police administration suppressed that other survey over vaccine mandates. The WA Police management apparently does want these officers entertaining such thoughts.

The Falconer trial is now listed to commence on July 13. One of the witness at the trial will be Nikolai Petrovsky, a professor of medicine at Flinders University and director of endocrinology at Flinders Medical Centre. His evidence will call into question the scientific credibility of the WA government’s decision in October of last year to impose vaccination mandates on a large proportion of WA’s workforce.

Petrovsky’s evidence was a critical factor in the judicial review by the High Court of New Zealand, where the police and defence force vaccine mandates in that country were struck down.

Unfortunately, the trial will not be livestreamed, due to opposition from counsel for the chief health officer and police commissioner. Indeed, the lengths the state of Western Australia and Dawson have allegedly gone to potentially obfuscate, delay, and perhaps suppress information that may cause harm to their position is extraordinary and takes one’s breath away.

If successful, this case may provide an opportunity for sacked or disciplined workers to be re-instated and have sanctions removed. We commend all those involved in this legal challenge for their courage to stand up against the oppressive measures of a government that is drunk with power.