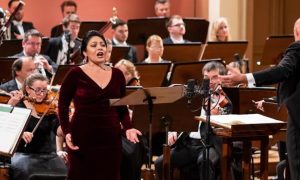 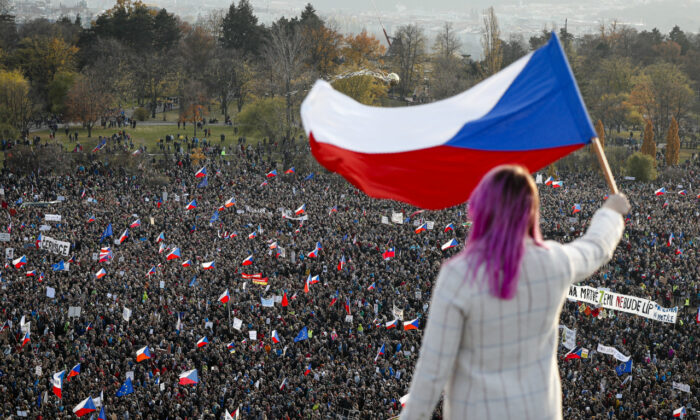 A woman waves a Czech flag from a roof as people take part in a large anti-government protest in Prague, Czech Republic on Nov. 16, 2019. (Petr David Josek/AP)
Europe

Czechs celebrated the 30th anniversary of the Velvet Revolution on Nov. 17, flocking to central Prague for concerts and speeches to commemorate the end of communist rule.

The Communist Party in what was known as Czechoslovakia kept a tight grip on power even after the Soviet Union reformed communist policies in 1986, and the Berlin Wall that separated the Eastern Communist Bloc from the Western world fell on Nov. 9, 1989.

Following the fall of the Berlin Wall, Czech students took to the streets to peacefully protest against communist rule on Nov. 17, 1989. Riot police trying to disperse the demonstration attacked them and, as a result, 167 protesters were hospitalized.

The students did not give up and the attack sparked more demonstrations and strikes in Prague and other cities until Nov. 28, when the Communist Party relinquished power.

This year, on the eve of the 30th anniversary of the Velvet Revolution, a group called Million Moments for Democracy organized a demonstration in Prague at Letna Park demanding that Czech Prime Minster Andrej Babis sever ties to his Agrofert business—which the group says represents a conflict of interest—or step down by the end of the year.

Police estimated the crowd at 200,000 while organizers pegged the turnout at 250,000, according to Reuters.

Babis, 65, is a billionaire businessman who founded a political party called ANO—which won the election in 2017 and remains the most popular party in Czechia. Babis has described ANO as a “catch-all-party,” according to Radio Prague International. “ANO has programs for entrepreneurs and employees, pensioners and young families, scientists and athletes,” Babis said.

“We are a movement without an ideology, a movement that serves everyone and has a program for everyone,” said Babis, the radio station reported.

In April, Czech police proposed that Babis be formally charged for fraud in tapping a European Union subsidy a decade ago—before he entered politics—to build a hotel and conference center outside Prague. Babis has denied any wrongdoing.

In September, the Prague state attorney said he had halted a criminal investigation into whether Babis had abused EU subsidies. That decision, however, will be reviewed by a supreme state attorney who has the right to overturn it.

Babis suffered another setback from leaked preliminary results of an audit by the European Commission, which determined he is in conflict of interest as the beneficiary of trust funds where he had transferred his chemicals, farming, media, and food business, valued at $3.6 billion by Forbes.

Before entering politics Babis headed Agrofert, a corporate group of companies in agriculture, renewable energy, and media. Babis has reportedly resolved any conflict of interests issues by moving his assets to trust funds. The funds are overseen by his long-time associates and his wife.

Babis insists that the audit, which says companies in the trust fund should not be eligible for EU development subsidies, is wrong and that that would be proven in the conclusions expected late this year or early in 2020.

Asked about the protests, Babis denies any wrongdoing and says there is no reason for him to resign.

“It’s great that people can express their view and nobody persecutes and attacks them,” he said.

The prime minister is also facing allegations that he collaborated with then-Czechoslovakia’s secret police before 1989, and has been criticized for his administration’s power-sharing deal he signed on July 10 last year that gave the Communist Party a role in governing for the first time since the Velvet Revolution.

Radio Prague International reported that Petr Fiala, the leader of the Civic Democrats—the second largest party in the lower chamber of the Czech Parliament—says he does not expect Babis to fulfill the demands set out by protesters on Saturday, and that the only way to change the situation is at the ballot box.

In 2017, ANO won the Czech parliamentary election in a landslide, taking 78 out of 200 seats in the lower chamber of the parliament.

On the 30th anniversary of the Velvet Revolution, Babis said in a speech: “As you know, I was a member of the Communist party … I am not proud of that.”

“And thanks to those of you who express their opinion and care about what country we live in. Although we can differ in our opinions—and we do differ—that is what political opinions are for.”