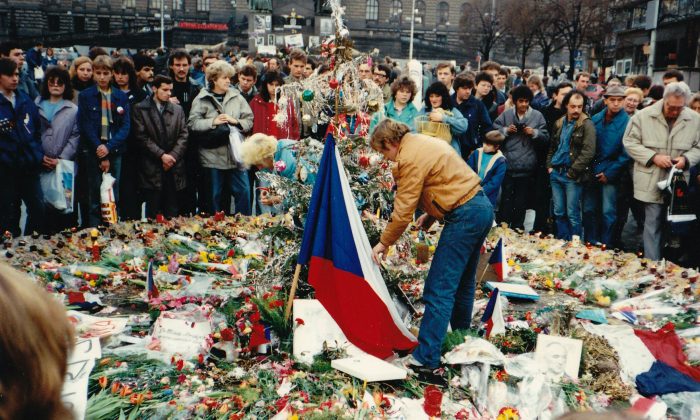 Czechs and Slovaks Still Search for Truth and Love, 25 Years After the Velvet Revolution

The poster has been hung, in part, to mark 25 years since the Velvet Revolution, or as it is known to Slovaks, the Gentle Revolution.

At the time, Czechoslovak citizens congregated on the square to jangle their keys and express their support for change. They were ready to end communist rule and move towards democracy.

The authorities had responded violently to a student demonstration on November 17 1989 so Havel and other intellectual dissidents had helped mobilise a series of peaceful protests in response. Within ten days, they succeeded in overthrowing one of Eastern Europe’s most repressive communist dictatorships. The clarion call was “Havel na Hrad” (Havel to the castle as president).

Half Full and a Quarter Empty

The magnitude of the achievements of Czechs and the Slovaks in the past quarter of a century should not be underestimated. The post-communist challenge of democratisation, marketisation, state-building after the break-up of Czechoslovakia and integration into Western structures such as NATO and the EU were hard enough. Then these small export-orientated economies have had to cope with the credit crunch and the woes of the eurozone crisis too.

In many respects, the Czech and Slovak Republics seem better placed than some fellow EU member states in Western Europe to cope with the challenges of the 21st century. Citizens overwhelmingly value the freedoms brought by the end of communism. They enjoy open access to information, the ability to express their opinions and the opportunities to work, study and travel abroad that were not possible before the revolution. But ask them about social values, crime and employment and their answers are very different.

There is a certain discontent that stems from a sense that the promises and aspirations expressed during the heady days of November 1989 have only partially been delivered. Some citizens – especially the less virtuous ones – have benefited considerably more than others. It is difficult not to turn on the TV news or open a newspaper in either country without being regaled with the juicy details of the latest corruption scandal. Politicians and businessmen have been able to use their connections – some of which were forged in communist times – to strike lucrative deals that pay well for them but less well for the state.

And perhaps the most striking finding of the CVVM/IVO research is that Czechs, and particularly Slovaks, see little or no improvement in terms of equality before the law. This suggests a strong sense of disenchantment with the post-communist judicial and legal system.

The disillusionment with politicians has fuelled support for a steady succession of new parties. In the 2010 Czech elections, for instance, a new party called Public Affairs called for an end to “political dinosaurs”. The message struck a chord with voters and the party was propelled into a coalition government. The victory was short lived though, as Public Affairs crumbled under the weight of its own corruption scandals.

Then in the 2013 elections, another new party with an anti-corruption appeal performed well enough to secure prominent portfolios in government. The ANO is founded and led by the billionaire businessmen Andrej Babis, who is now deputy prime minister of the Czech Republic. His party seeks to appeal to voters not just by opposing corruption but by pushing the cult of the expert.

Babis is an attractive option because he has demonstrated his ability to succeed in business after 1989 and might, therefore, be seen as more capable of running the country more effectively than a career politician. But Babis faced years of criticism over allegations that he acted as a security agent for the Communist regime. And while he eventually cleared his name, his struggle acts as a reminder that while 1989 may have marked a change, the slate was not wiped entirely clean.

In 1989, Havel proclaimed that “truth and love must triumph over lies and hatred”. A generation later, for both Czechs and Slovaks, truth and love appear to have gained the upper ground. Lies and hatred remain though – and perhaps more significantly disillusionment persists.

Havel’s image on the front of the National Museum will not be there forever, but the health and quality of democracy in the Czech Republic and Slovakia are dependent on a new generation of citizens willing to fight for the truth and love that formed the basis of his protest back in 1989.

Tim Haughton has received funding in the past from the Nuffield Foundation, the Leverhulme Trust, the Economic and Social Research Council and the Austrian Marshall Plan Foundation. This article was originally published on The Conversation. Read the original article.