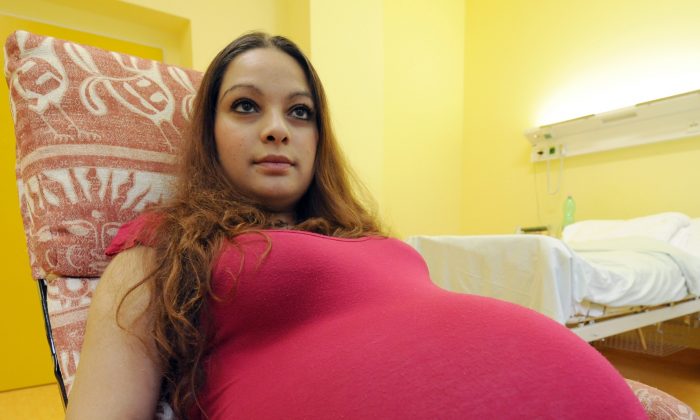 Twenty three-year-old Alexandra Kinova from Milovice, about 30 km east of Prague, smiles as she waits for the delivery of quintuplets at Prague's maternity hospital in Podoli Wednesday, May 29, 2013. (AP Photo,CTK/Stanislav Zbynek)
Europe

A woman in the Czech Republic recently gave birth to the country’s first set of quintuplets, it was reported.

Alexandra Kinova, 23, had one girl and four boys via a caesarean section last Friday, reported the BBC. They children were born “without any complications,” a doctor told the broadcaster.

“The girl is named Tereza, the identical twins Michael and Deniel and we also have Alex and Martin,” the father, 26-year-old Antonin Kroscen, told the Daily Telegraph. “I’m very happy,” he said.

The couple already has a son at home.

“I was crying all the way since I feared I would not manage it,” he told the BBC.

“In our country (birth) statistics have been recorded since 1949 and there’s no mention of quintuplets. In the Czech Republic quintuplets are born on average once every 480 years,” obstetrician Alena Mechurova was quoted by the Telegraph as saying.

Zbynek Stranak, the doctor in charge of the delivery, said Kinova and her five children were placed in an intensive care unit, reported The Associated Press.