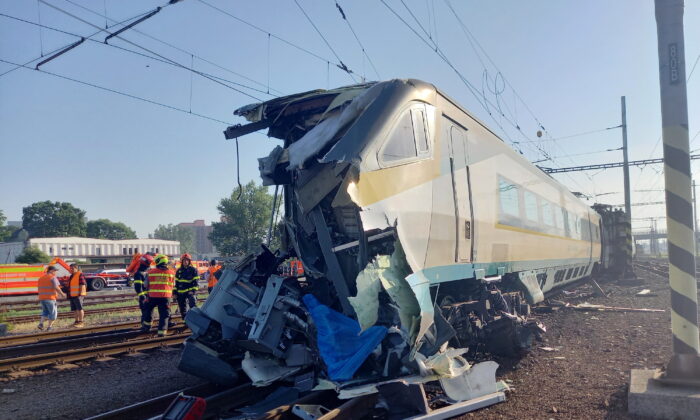 The bullet train after a collision, in Bohumin, Czech Republic, on June 27, 2022. (Czech Rail Safety Inspection Office via AP)
Europe

PRAGUE—A bullet train collided with an engine in a train station in northeastern Czech Republic Monday, killing one person and injuring five.

Czech Railways said the accident took place early in the morning in the town of Bohumin, shortly after the departure of the Pendolino train for Prague.

The driver of the bullet train was killed, while four Czech Railways employees on the engine and one on the train were injured. It was unclear whether the engine was moving at the time of the head-on crash.

Rescuers said no passengers were injured.

The Rail Safety Inspection Office, an agency that investigates train crashes, said the high-speed train was on the wrong line at the time of the crash, and the accident might have been caused by human error.