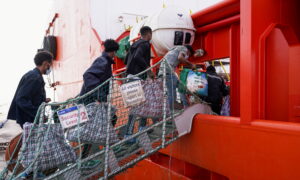 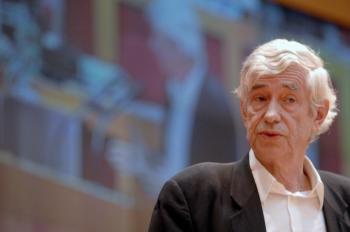 PRAGUE, Czech Republic—Fans, artists and politicians attended a final farewell with Czech-born architect Jan Kaplicky on Jan 27. The renowned designer died unexpectedly on one of Prague's streets on Jan. 14, collapsing just hours after the birth of his daughter, Johanka, by his second wife, Eliska.

Kaplicky immigrated to London in 1968, where he founded the Future Systems architectural studio, best known for his high-tech buildings with radical futuristic designs. He’s the mastermind behind edifices such as the Selfridges Building in Birmingham, or the Media Centre at Lord's Cricket Ground in London.

The uncompromising architect challenged the public by winning the competition for a new National Library building in Prague, with his green and violet octopus-shaped design. Execution of his work was blocked by several Czech politicians lead by the current president Vaclav Klaus, who simply didn’t like it.

Former Czech president, Vaclav Havel, who is currently in the hospital with lung inflammation, wrote a letter to newborn Kaplicky's daughter, Johanka, saying: “I wish you don’t have to face small-mindedness more than it will be necessary in your life," as read aloud by his wife, Dagmar Havlova, at the farewell.