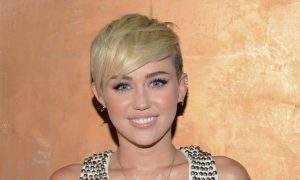 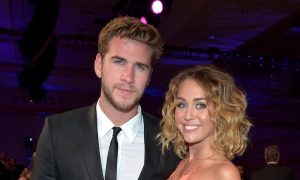 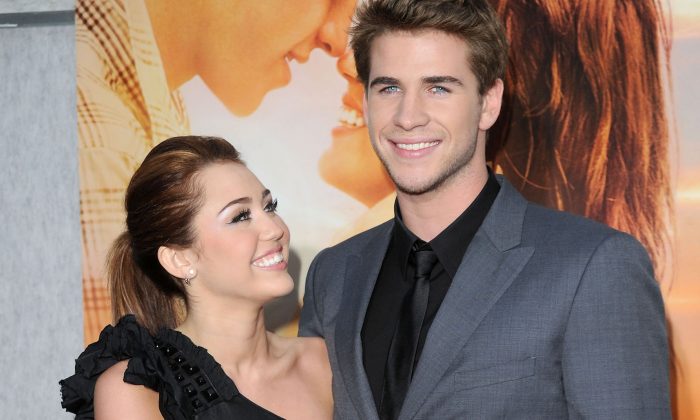 More photos are pouring in following the secret wedding of Miley Cyrus and Liam Hemsworth. This time, family members give us a glimpse into the special day.

The “Nothing Breaks Like a Heart” singer’s mother, Tish Cyrus, shared a stunning photo of Miley posing beside her and Billy Ray Cyrus. The three are in front of a backdrop decorated with roses and delicate Baby’s-breath flowers. Miley stuns in a floor-length white Vivienne Westwood gown and holds a black-and-white bouquet of flowers.

“This makes my heart so happy,” Tish captioned the photo.

In addition, the “She’s Not Cryin Anymore” singer also posted an action shot of the family gathered around the wedding cake, with Miley about to cut a slice. He also revealed his surprising mobile phone choice.

“Wedding wouldn’t be complete without one shot from Dads outdated blackberry camera. Love seeing all so happy.”

Wedding wouldn't be complete without one shot from Dads out dated blackberry camera. Love seeing all so happy

The father also shared a color version of the newlyweds embracing as they share a quiet moment together.

Both Cyrus and Hemsworth posted the black-and-white versions of the photo on Wednesday, Dec. 26, confirming the wedding rumors.

Hemsworth, 28, also shared the same photo, captioning it: “My love.”

And what has several fans melting is when author Nicholas Sparks tweeted: “This makes me so happy. Congratulations @MileyCyrus and @LiamHemsworth. #TheLastSong”

This makes me so happy. Congratulations @MileyCyrus and @LiamHemsworth. #TheLastSong https://t.co/LX8C4IVOGF

Cyrus and Hemsworth met on the film set of “The Last Song” where they costarred as love interests. Soon, their on-screen romance blossomed off-screen as well, and by March 2010, the two announced that they were dating offscreen as well.

In 2012, the two got engaged, but then broke it off a year later. That’s also when the “Wrecking Ball” Miley came on the scene. Two years later, in 2015, the two rekindled their romance and by 2016 they were engaged once more.

Cyrus just posted a photo from “The Last Song” film of her and Hemsworth, with a closeup of her sneakers with the “Forever” written on it. She captioned the post: 10 years later….Forever #TheLastSong” along with a crying emoji and a heart.

Needless to say, “The Last Song” fans are melting over their on-screen love interests getting married in real life, with fans writing “I’m melting” and lots of “congratulations” pouring in.

For fans that were worried the couple’s love wouldn’t persevere through the rough years, an insider source told People that Cyrus has been thinking of saying “I do” for some time now.

“In the past, any time Miley would talk about getting married to Liam, she would always have a huge smile. She has been wanting to get married to Liam for years,” the source told People. “Everyone is very excited for them. Miley’s family always loved Liam.”

The American singer and Australian actor tied the knot in an intimate ceremony at Cyrus’ Franklin, Tennessee home, multiple sources confirmed with People.

“They always wanted a small, private celebration with family and close friends and that’s what they got,” an insider told People. “Miley seems ecstatic.”

Hints of such an intimate ceremony were revealed back in 2012 when Miley told Ellen DeGeneres: “This is the one day that it’s what I choose and every detail is things that I love and I think that look. I don’t want people to ever forget about that.”

“There is some rumor going around that I’m having like 47 weddings,” she continued. “I’m not. I’m having one wedding. That’s my day and whatever I want on that day will be about me and that moment. That look of love.”

And the “Malibu” singer got her wish.

In fact, in the 2017 song “Malibu,” the singer seemed to talk about her love for Hemsworth in the lyrics: “I’d spend the rest of my life just standing here talking/You would explain the current, as I just smile/Hoping I just stay the same and nothing will change/And it’ll just be us, just for a while.”

The two originally planned to wed in their Malibu home, but it was destroyed by the Woolsey fire in November. Afterward, the couple donated $500,000 to charity to help rebuild the community destroyed by the California wildfires.

Because of the recent tragedy, the two had to make some quick changes. An insider source told ET: “They did some quick pre-planning before the holiday and decided that they didn’t want a big elaborate wedding. They truly wanted to keep it a secret. They just wanted the people most important in their lives present.”

“It was so touching,” the source continued. “They decided to do it at their home in Tennessee, as they have talked about in the past.”

In the end, everything worked out with the two happily married.