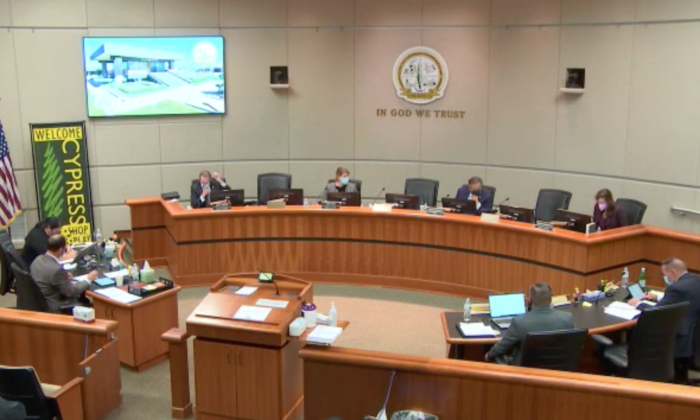 CYPRESS, Calif.—Residents and officials may now be reprimanded if they engage in “inappropriate” or “derogatory” behavior during city council meetings thanks to an amended “civility” policy and a near rewrite of a city ordinance that hasn’t been changed in nearly 60 years.

The amended ordinance includes censure, fines, and further penalties if a person violates the “order and decorum” of a meeting.

According to the new version of the ordinance—which was written in 1965—city councilors, city staff, and the public can be placed under arrest, for a misdemeanor, for example, and prosecuted.

The amended ordinance, which was approved on March 28 with a 4–1 vote, is effective April 13, 2022. Councilmember Frances Marquez voted against it.

The issue of the new “civility policy”—a 14-page document that seeks to promote “positive and productive working relationships”—has been a hot topic on the council for the last few months.

Marquez, who was elected in 2020, in February refused to sign it saying it was “unconstitutional” and an infringement on free speech.

“I wanted to put this dispute to bed so we can move forward” and focus on serving constituents, Marquez said as she submitted her signature during the council meeting.

The civility policy was proposed after months of disagreement between Marquez and the council, with Marquez complaining of “bullying” behavior she claims occurred after she questioned the council’s decisions on a number of policies and issues.

“What I’m concerned about is it depends on how it’s interpreted. … [We need] language not open to interpretation and possible abuse by future council members,” Marquez said.

Some residents attending the meeting also voiced concern and expressed disappointment that Marquez changed her mind.

Another wondered why such a civility code was needed at all.

“This policy seems redundant,” Cypress resident Rita told The Epoch Times on grounds that her last name is withheld. “I think we all know how to be civil to each other in a meeting.”

Marquez said she consulted with several attorneys prior to signing the new policy and was assured that “anything this council passes or enacts that infringes on state or federal [law] or the constitution is invalid.”