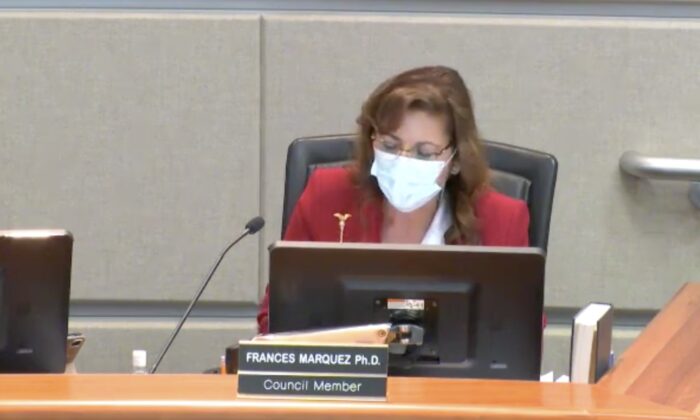 The censure against Marquez, the sole dissenting vote, registers as a formal reprimand, whereby she will be required to pay a $100 fine to the city for her alleged violations.

According to the public records request against Marquez, the councilwoman has failed to produce all the relevant correspondence from her meetings with any third party, including journalists and private residents. This correspondence includes any email, text, written letters, diary entries, and more.

Additional records demanded from her include “documents of any kind submitted in any way between her and anyone else,” voicemail, emails sent or received from non-government emails, telephone calls, any conversation or meeting between two or more persons, bank statements, contracts, books, ledgers, and others.

According to Mayor Paulo Morales, who placed the censure on the agenda, Marquez had put the city in an “untenable” position, while noting that she is the first on the council to be censured in the city’s 66-year history.

“This resolution is not something I take lightly. … Her failure to meet the minimum standards of civility in her elected role betrays the sacred oath of office that each one of us takes,” Mayor Morales stated during the proceeding.

According to Morales, in addition to allegedly violating multiple codes and the city’s charter, Marquez also made “unfettered” attacks on city staff, “fabricating” information and accusing the team of unethical conduct, including city manager Peter Grant and city attorney Fred Galante.

Morales claims Marquez accused Grant, the city manager, of opening her mail and impeding her from “doing her job” without his involvement, as well as eventual “harassment,” as Marquez stated during multiple meetings since January of this year.

Marquez lodged her own response to the allegations against her, noting that she submitted all the required information from the public records request, and that staff is still “harassing” her with claims of “incomplete” submissions.

“I’m being targeted. … [The city staff] started this harassment,” Marquez stated, adding that she was never trained by the city to handle public records act requests and that, despite her lawyer contracting COVID-19 during these proceedings, she still hired another attorney out-of-pocket to comply with the city’s requests, submitting the documents to the city attorney.

Additionally, Marquez claimed she has been subject to constant harassment, bullying, and an overall “hostile work environment,” within the city council from the start of her term in 2020.

Councilman Jon Peat leveled the same claim of harassment back at Marquez during the meeting, doubling down on allegations that she violated the city’s civility code of conduct.

“Councilmember Marquez is not a victim of bullying, harassment, or retaliation,” Peat said. “Rather, she has been the instigator of such behavior towards each of us.”

Although the meeting is over, disagreement between Marquez and city staff continues on.

“[The council] is using hard-earned taxpayer dollars of the residents of Cyprus to harass a council member who is fighting for transparency,” Marquez told The Epoch Times of the proceedings against her. “It’s a misappropriation of public funds for non-public purposes.”

Several residents voiced their support for Marquez during this week’s meeting.

“She supports the community, and I don’t think she deserves censure,” one resident noted during public comments, noting that information she allegedly leaked from a private session was information the public should have been aware of. “You shouldn’t be having all these back-door deals and meetings in the first place.”

Speaking through tears, another resident stated that Marquez was the first city representative that she felt represented her and her family in the 55 years her family has lived there.

“She should not be penalized for expressing her views or asking questions. … She deserves the opportunity and respect to do her job,” Roseanne Howard said before the vote. Her emotional statement was met with thunderous applause.

The public records request against Marquez, described as “bordering on insane” by one resident, received additional blowback from members in attendance at the Monday meeting.

“[Marquez] is the only person on the dais that’s actually being transparent here. Censure is not the answer,” another resident commented before the motion came to a vote.

These actions come amid pending litigation waged against the city for their own alleged violations against residents, namely the California Voting Rights Act and the state’s public records act.