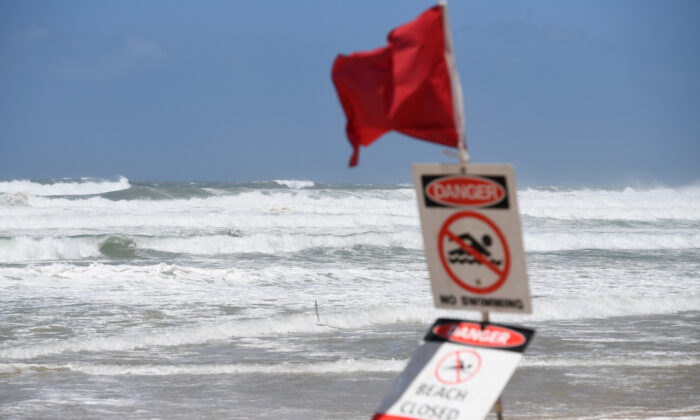 BRISBANE, Australia—Tropical Cyclone Seth is expected to trigger dangerous surf and abnormally high tides as it begins to head south off the Queensland coast.

It was moving south southeast at 29 kilometres per hour.

Although maintaining its intensity, Seth is forecast to slow and shift southwest on Sunday afternoon.

While unlikely to directly impact the coastline over the following 48 hours, the BoM said the cyclone would cause dangerous surf and abnormally high tides about the southeast Queensland and northeast NSW coastlines from Sunday.

Severe weather warnings are current for both regions.

The bureau says Seth should weaken as it transitions into a sub-tropical system on Monday.

“Movement beyond this time becomes uncertain,” it said.

“However there is a general indication that it will drift westward closer to or over the Australian coast during next week.”

Seth was downgraded from category two to a category one on Saturday.

A strong wind warning was issued from Mackay to Sunshine Coast on Saturday, with gales expected to impact the southeast by Sunday after gusts of more than 100 km/h off the coast on Friday night.

BoM also issued a severe weather warning from Wide Bay to the southeast coast with high tides expected to reach an “astronomical peak” over the next few days, easing on Wednesday.

Gold Coast Mayor Tom Tate said authorities were doing some modelling on Saturday to see what impact the expected high tide would have on low lying areas.

The area was expected to be hit on Sunday with waves of up to four metres.