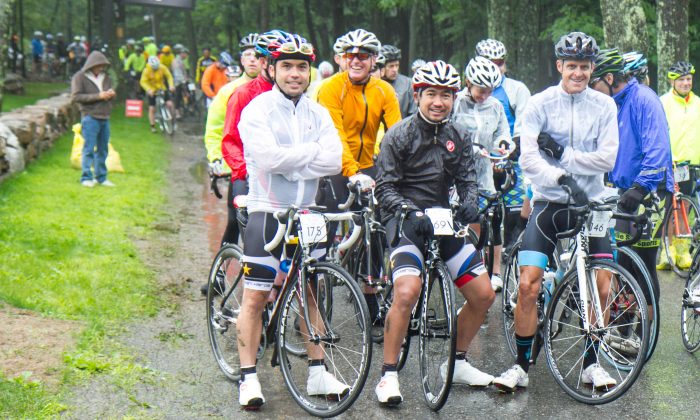 Bikers before the start of the ride at Cedar Lakes Estate in Port Jervis, N.Y. on June 28, 2015 (Holly Kellum/Epoch Times)
New York

GREENVILLE—It was the cross section between biking, local food, and appreciation of open space that led Tyler Wren, a former professional cyclist, to organize the first Farm to Fork Fondo in Greenville on Sunday.

“It’s really important for us as cyclists to support the local farmers because not only do they make great food that makes us healthier people and better riders, they’re the ones who maintain the beautiful roads that we like to ride on,” he said at the event.

The Fondo, which means “ride” in Italian, started and ended at Cedar Lakes Estate in Greenville with stops along the way at farms in New Hampton, Pine Island, Westtown, and Otisville.

“Orange County is filled with beautiful country roads, beautiful farmland roads, but there’s also pockets that have been developed and they’ve lost some of the beautiful rides and they’re getting busier,” Wren said.

It’s really important for us as cyclists to support the local farmers because not only do they make great food that makes us healthier people and better riders, they’re the ones who maintain the beautiful roads that we like to ride on.
— Tyler Wren, Organizer, Farm to Fork Fondo

“I’m trying to motivate the cyclists to be aware of this, to raise awareness that we need to support these small farmers.”

In addition to raising awareness about the local farms, the event also raised money for the Orange County Land Trust in Chester, and the Sanctuary for Animals in Westtown. Combined, the event raised almost $2,000 for the farms and non-profits.

One of the farms along the route, W. Ragowksi Farm, was damaged in 2011 during hurricane Irene and is still rebuilding.

The farm lost over two-thirds of its produce at the time. One road is still sliced in two from the rain and there are barns that need to be repaired.

With the money that she got from the community after she lost her crops to Irene, Cheryl Ragowski, the owner of the farm, was able to put modern lighting in her greenhouse. With more money, she can fix up her barns and other damaged structures, she said.

Over 450 riders registered for the ride, Wren said, with the all-inclusive weekend packages selling out in advance.

He said the downpour right before the race was to start likely deterred some people, but he didn’t know the final count. The 9:00 a.m. start time was pushed to 9:30 to let the worst of the rain subside, which it did, but a steady drizzle accompanied the riders throughout.

Michael Clubine, who came up from Manhattan with two friends said he definitely had second thoughts even after waiting a little longer for the rain to pass.

“It’s a little disappointing because you have to ride more cautiously because of the rain—your brakes work a little differently, the roads are a little slicker, you have to be more cautious so you can’t fly down the hills,” he said, adding it was also hard to see through his glasses.

He said he enjoyed the scenery and was thinking about coming back another weekend when the weather is better.

As the inaugural Farm to Fork Fondo, Wren said everything within his control went well, although he was disappointed by the weather. Having been well-received by the cycling community, he hopes to one day have Farm to Fork Fondos all over the country.

Update: The amount raised for the farms, Land Trust, and the Sanctuary for Animals was added.