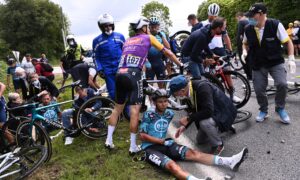 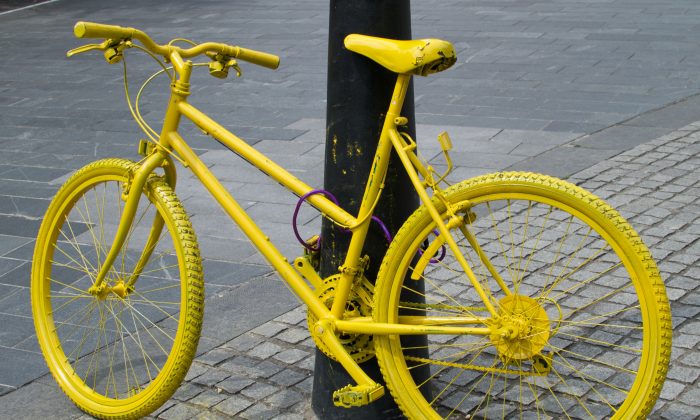 One of the many bicycles painted yellow to be seen around Yorkshire before and during the UK Grand Départ of the Tour de France. (Epoch Times)
Cycling

As Tour de France bicyclists set off in the late morning through cheering crowds of sunny spectators in the north of England on Saturday July 5th, the English weather was keeping the streets of the UK’s busiest cycling city fairly quiet.

Cambridge has the highest level of cycling in the country with one in three residents cycling to work, according to its City Council website. But before the city hosted the start of the third stage of the Tour on Monday July 7th, some critical eyebrows had been raised at what was considered a lack of enthusiasm from the university city compared to ‘Up North’.

“I can’t understand why anyone would think that Cambridge is not celebrating this momentous day,” Julian Huppert Member of Parliament for Cambridge told the Epoch Times in an email.

“There is mounting excitement in Cambridge as the event gets nearer. Businesses have given their staff the day off to watch the cyclists come through the city and school childen will be lining the route having learnt all about it in their lessons.”

One local resident said, “We have had the banners for the Tour de France hanging from lamp posts for a few months now. I couldn’t figure out why there were Tour de France banners around Cambridge in the Spring.

“I finally figured out that Cambridge was hosting the Tour when I volunteered at the (huge!) Cambridge Beer Festival in mid-May. The tee-shirts had a funny design on the front with lots of French things and people—croissant, frogs, Marcel Marceau—the tee even had Jean Luc Picard!”

Besides bunting, banners, and a lot of French themed activities, the stage one start in Leeds had a giant inflated bike as well as the city centre’s equestrian Black Prince and other prominent statues rigged out in yellow jerseys.

The second stage finish in Sheffield had one of its main educational buildings, (said to be the tallest university building in the UK, the grade II listed, 1960s Arts Tower of the University of Sheffield) have all its yellow interior blinds pulled down, all the staff wearing yellow tee shirts, and the café had a yellow bike on the wall behind the till.

Part of the heightened contrast between the two Yorkshire stages, London, and Cambridge could be the integration of the event in the north by Welcome to Yorkshire. The company was launched in 2009 and has achieved record revenue for local businesses and lifted the World Travel Award for World’s Leading Marketing Campaign.

London, the last UK venue for the Grand Départ, greater promotional resources than the smaller city of Cambridge that relies mainly on its ancient university for outside earnings from students and tourists.

London also has valuable experience from previously hosting the Tour in 2007. All of which seems to leave Cambridge out on its own.

Although the Olympic-style Opening show in Leeds on Thursday July 3rd may not be matched by other cities on the way to Paris, each route will have the business promotional caravane travelling two hours before the cyclists and taking about three quarters of an hour to pass.

By the time the 197 professional, lycra-clad cyclists and their entourages left the UK for the start of the fourth stage in Le Touquet on Tuesday, 180 cars and floats emblazoned with logos had given out millions of freebies including teabags, sweets, hats, rubber bracelets, soft drinks, and tee shirts.

And Cambridge had returned to more normal clothes and cycling habits.