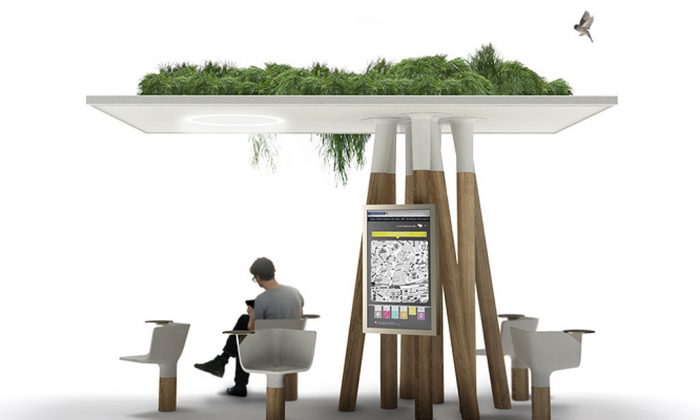 Cyberparks Will Be Intelligent Spaces Embedded With Sensors and Computers

Visit any urban park on a sunny day and you’ll see people relaxing with newspapers, books and, of course, phones and tablets. The digital has become part of our outdoor lives and that trend is set to continue. But there is another trend to take into consideration – the fact that many of us really prefer to stay inside.

In 2009, the Monitor of Engagement with the Natural Environment survey began collecting detailed information on the public’s use and enjoyment of the outdoors. It found that while half (54%) of the adult population normally visited open spaces in and around towns and cities, such as parks, canals and nature areas, coasts and beaches; or countryside areas such as farm and woodland, hills and rivers at least once a week, 10% of respondents stated they had not visited the great outdoors in the previous 12 months and 8% had made only one or two visits. The figures could be better. There is plenty of evidence to show that being out in nature is good for our physical and mental health.

So can we capitalise on our new-found love of the wired life to encourage more people to go outside? A new European research project called CyberPark aims to foster greater knowledge about the relationship between technology, communication and public spaces. Its main objective is to strengthen the dialogue between those already involved in creating public spaces and developing technology, and create new conversations designed to share knowledge, spark new ideas, and trigger new projects which capitalise on bringing nature and the digital closer together.

It has great ambitions: a world of intelligent environments where sensors and computers are seamlessly embedded to enhance ordinary park activities, places where the landscape itself might respond to people moving through it. An indoors example of this might be Canadian architect Philip Beesley’s installation Hylozoic Ground, an immersive, interactive environment that moves and breathes around its viewers in which Beesley uses next-generation artificial intelligence, synthetic biology, and interactive technology create an environment that is nearly alive.

In the past, the natural environment and digital domains were seen as distinctly different. But the growth of social media, wearable tech such as smartwatches, mobile connectivity – and that we now carry the internet in our pockets – are profoundly influencing the way we experience time, space, and other people. Soon, the rise of Google Glass and Oculus Rift, the virtual reality gaming headsets, will lead to even more blended environments.

The CyberParks idea grew from a project which started in Ljubljana, Slovenia, in 1984, when landscape architect Ina Šuklje and her colleagues won a competition to design a new park on brownfield land close to the city centre. Bureaucratic hold-ups meant that the project proceeded slowly, but they did create a series of popular outdoor multimedia reading portals under the theme “United Books of the World”. However, financial support dwindled and the portals could not be maintained. They fell into disrepair.

But when Lisbon-based landscape architect Carlos Smaniotto Costa visited the city in 2010, Šuklje’s experience ignited a new idea. The futuristic concept had been built before its time and was poorly supported by its funders. But now, in the second decade of the 21st century, the time was right to marshall the resources of the European community and learn how it might be done on a bigger scale. And so the idea of CyberParks was born.

Smaniotto Costa co-ordinated an application to the European Co-operation in Science and Technology(COST) fund, one of the longest-running European instruments supporting co-operation among scientists and researchers across Europe. It saw CyberPark as a promising transdisciplinary idea, and agreed to fund it. In April 2014 the team met for the first time at COST’s towering offices in Brussels. I was there too, invited to contribute my technobiophilia research to the discussions.

A number of projects related to the CyberPark ethos have already appeared. In Paris, for example, Escale Numérique (which translates as Digital Break), was designed by Mathieu Lehanneur to stand at the Rond Point des Champs-Elysées. Inspired by the city’s 19th-century network of drinking fountains, it taps into an underground fibre optic network to provide a fountain of free wifi in a haven of quiet on a busy city street. Comprising a large touch screen protected by a sustainable green roof covered with plants and concrete swivel seats with mini tables and an electricity supply, it heralds the kind of thing that could be achieved on a larger scale.

The CyberPark team want to go further. Researchers from 21 countries gathered round the table at our first meeting in Brussels. There were urban planners, anthropologists, digital media specialists, landscape architects and architects, engineers, computer scientists, geographers, interaction designers and psychologists. At break time, I asked around. Did anyone have a clear idea of what a cyberpark might actually be? Nobody did, but that was the point. We were there to find out, to embark together on a four-year adventure to discover the future of urban parks. But we all agreed on one thing – however digital it might get, the essence of the park is all about being outdoors, experiencing nature, and encountering other people.

“I just want to know,” said Thanos Vlastos, a professor of urban and transport planning at the National Technical University of Athens and self-confessed utopian, “how we get people to go outside?” It’s something that we plan to find out.

Sue Thomas does not work for, consult to, own shares in or receive funding from any company or organisation that would benefit from this article, and has no relevant affiliations. This article was originally published on The Conversation. Read the original article.