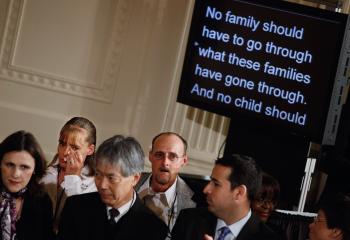 Joshua Philipp
Joshua Philipp is an award-winning investigative reporter with The Epoch Times and host of EpochTV's "Crossroads" program. He is a recognized expert on unrestricted warfare, asymmetrical hybrid warfare, subversion, and historical perspectives on today’s issues. His 10-plus years of research and investigations on the Chinese Communist Party, subversion, and related topics give him unique insight into the global threat and political landscape.
View profile
Follow
biggersmaller
Print
When communication entered the cyber domain, the problems found in the adolescent social sphere followed close behind. Cyberbullying has become an increasingly popular method for kids harassing kids, as bullies can access their victims through cell phones or computers any time of the day.

The problem has reached an extent to where President Barack Obama addressed the issue directly during a March 10 speech at the White House, drawing attention to recent suicides of kids who were targets of bullying. “Today, bullying doesn’t even end at the school bell—it can follow our children from the hallways to their cell phones to their computer screens,” Obama said.

Adam Hildreth, CEO of software company Crisp Thinking, saw this problem early on when he used to develop virtual, online worlds for kids.

Many online spaces, from chat rooms to online video games, employ moderators to scan over messages in search of harmful content. The problem was, as the online spaces began to grow past 10,000 users, or even into the millions, monitoring the content becomes nearly impossible. “There’s just too much data floating around, and it also becomes very expensive,” Hildreth said in a phone interview.

While working with the U.K. government to stop cyberbullying and online sexual predators in 2000, inspiration hit. “I thought ‘hey, if we can stop spam in e-mail why can’t we work out what humans are doing to each other online. So that’s really where we started out,’” Hildreth said.

With this, Hildreth would go on to develop a new type of behavioral monitoring software that would change the game on cyberbullies. The system, run under Crisp Thinking, takes a fresh approach at rooting out problematic users.

There was a simple premise behind the software—address the problem in a way most monitoring systems fall short. The program has a unique ability to sort out joking from cruelty and is designed with a special knack for catching the gist of longer conversations where problems may not show on the surface.

Hidreth’s software runs a kind of “credit check” on the user. “What do we know about the user, what are they saying at the moment, and how is the other person reaction to what’s being said. That doesn’t tell us exactly what’s going on, but it gives us a great context to make a decision,” he said.

The software has since been picked up by big-name clients, including Sony Entertainment, the Cartoon Network, and LEGO. Crisp Thinking was also chosen to partake in the U.K. government’s Web Mission 2011 project that flies 20 of the top up-and-coming tech companies in the U.K. to Silicon Valley, where they network with U.S. tech companies.

Today’s kids live dual lives between the real world and the digital world. They have online identities, whether in the form of game characters or social network accounts, such as Facebook. There are even massive online games where thousands or millions of users can interact.

Since kids are always connected—whether through computers or cell phones—they are susceptible to this form of bullying at all times.

Cyberbullying peaks for kids between middle school and high school. It can include anything from cruel text messages, to spreading rumors through Facebook, to making websites meant to tease a kid, according to the U.S. government’s new StopBullying.gov website.

According to the website, kids facing cyberbullying are shown to have lower grades and are more likely to use drugs, skip school, or face in-person bullying.

It wasn’t long ago when users would get booted from online spaces for so much as using bad language. In early 2000, online games had fewer issues and played less of a role in the mainstream, but as these spaces began to grow, new problems arose.

“Everything is going social, games are going social. We’ve got more and more environments going for kids and teens. So as we get more and more user-generated content, the problem we have would continue growing if we didn’t have this system,” Hildreth said.

Crisp Thinking uses a “relation analysis engine” that will watch the relationship between users. “What our software does is it monitors that relationship over a period of time and it is trained to respond to instances where cyberbullying is happening or online grooming by a cyber predator,” Hildreth said.

The system will often give problematic users one warning before booting them from its system and close to half of the users who are warned to turn their behavior around. Hildreth said he is also looking into ways of rewarding users who contribute to online communities, with hopes that it will encourage better online spaces.

Overall, the system gives, “reassurance that they can launch new games in environments for kids and teens, every message is being analyzed, and the accuracy of it means that their environment is safe,” he said.